Nicolas Wiedemann, also known as Nicolas W., Nico or the Viscount Wiedemann, is an American micronationalist, politician, and student who has served as Chancellor of Excelsior since 2020. Beginning his career in the micronational world in 2019 as President of the DCROW, his first micronation which he has called "an embarrassment", he was elected Chancellor of the Terra Excelsior Republic on 28 August 2020 and is recognized as one of the nation's two founders. Wiedemann has also held many other offices in multiple micronations, including serving as the Minority Whip of Georgienstine, the Government Leader of Kraitia, First Minister of Avalonium, and the Vice President of Vitione. He is federally recognized as a "founding father" of Vitione and has participated in the establishment of multiple other micronations. Wiedemann was Re-elected Chancellor of Excelsior on 8 May 2022.

Wiedemann is the founder of the New Libertasian Anarchist Republic and is currently fighting in the Libertasian Civil War.

Wiedemann serves as Minority Whip of the National Congress of Georgienstine and the Secretary of the Treasury under President Raphaël Olivier. A close ally of Benjamin Pickles, he has gained influence as a new, leftist politician despite being new to the Georgienstinian political stage. He has declined to run for President of Georgienstine when asked about a possible campaign by incumbent President Raphaël Olivier. On 30 January 2022 he was nominated by Raphaël Olivier to serve as Secretary of the Treasury, and assumed office 1 March. He is also the co-spokesperson and member of the national council of the Popular Unity Party. He was named Benjamin Pickles' running mate in the 2022 Georgienstinian presidential election as his nominee for Vice President on 12 April.

Wiedemann's politics are far-left, and he identifies as a socialist, cantonalist, Bookchin communalist, feminist, progressive, anti-imperialist, and environmentalist. He campaigned for the Democratic Party of the United States in the 2020 Presidential Election and is a registered member of the Democratic Socialists of America.

Wiedemann was born in New York City in early 2008. He grew up, and still currently resides in Windsor Terrace, Brooklyn, at the Capitol Palace. Before entering micronationalism, he was the leader of multiple school-based charity organizations, raising money for the American Red Cross and UNICEF. He was also an amateur cartographer and enjoyed studying epidemiology and politics.

Wiedemann began his micronational career in April 2020, after reading a book about micronationalism. He founded the Democratic Children's Republic, better known as the DCROW, which was an oligarchy. The nation was dissolved after just 32 days on May 7 due to internal conflict. Wiedemann says that the nation was "an embarrassment" and that he did not understand micronationalism when he founded it. 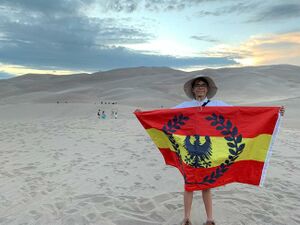 Wiedemann on a diplomatic mission at the Great Sand Dunes National Park.

Wiedemann founded his second micronation, the United Federation of the Terra Excelsior Republic, on 27 August 2020 with longtime friend Silas Wurnbash. The nation's first Chancellor, Wiedemann has been recognized as a popular, non-controversial politician who today enjoys support from both ends of the political spectrum in Excelsior. Wiedemann is the author of the Constitution of Excelsior and the Excelsioran Regulatory Code.

Wiedemann has long been supportive of the Federated States of Gapla, as relation with Gapla has been a political issue within Excelsior since founding. Wiedemann is a friend of Wyatt Seungri Baek, the Crown Prince of Gapla, and currently serves as a member of the Gaplan Reformation Council. Wiedemann was inspired by "Gapla: A Nation Made By Children", Baek's book, to found Excelsior, and thus has been supportive of Gaplan relations and has opposed all attempts at conflict with Gapla, usually by Silas Wurnbash. The public opinion towards Gapla in Excelsior has historically been negative, and this position of Wiedemann's has been criticized by Wurnbash and his Democratic Party. Despite his support for Gapla, Wiedemann spearheaded the move to mutually break bonds with Gapla, to ensure war did not break out between the two nations. Today, Wiedemann is active in Gapla and still supports it micronationally.

Wiedemann's Chancellorship has seen Excelsior from its founding to the present day, and has been turbulent, with multiple crises and wars. Wiedemann's Chancellorship can be characterized by its frequent and sweeping reforms, support for Gapla, opposition to corruption, and its establishment as a neutralizing force on Excelsioran politics. As Chancellor, Wiedemann is responsible for the Gaplan Treaty, as well as most of Excelsior's current signed treaties, the Judicial Reorganization, The States and Governor's Act, which established the position of Premier-General, and the April reforms, which made Excelsior a Federation. Wiedemann has spent most of his time as Chancellor on mundane tasks to keep the government operational, such as censuses, recordkeeping, facilitating and regulating government, and introducing general reform motions to the Senate. Wiedemann has also been known for his budget surpluses which have put over 400 dollars USD in the Excelsioran treasury, and his work on Excelsioran culture and online presence. Wiedemann's government is also commonly reshuffled or reformed internally, and is known for its close connections to the Presidential branch of the government. In the present day, Wiedemann's government has taken a more neutral stance in Excelsioran politics and has expressed more support for President Silas Wurnbash, whereas at the beginning of Wiedemann's term he was in staunch opposition to Wurnbash. Wiedemann was Re-elected Chancellor on 8 May 2022.

Wiedemann is close personal friends with Excelsioran President Silas Wurnbash, which has led to intense political disputes as well as deals with Wurnbash. During the start of his first term, Wiedemann opposed Wurnbash and his administration, and most politics centered around either support of Wiedemann, who led the socialist and pacifist left opposition, or Wurnbash, with a militarist capitalist stance. In more recent months this feud has ended and Wurnbash and Wiedemann have now become political allies, with the Democratic Party and Worker's Party even form ing the National Unity Coalition. Despite his early opposition to Wurnbash, however, Wiedemann has always endorsed him for the Presidency, as he has stated that "Excelsior without Silas would easily collapse in a matter of weeks".

Wiedemann is also active in the regional politics of the Townsville Special Administrative Region, as a resident of the region and Deputy Mayor. In March 2022 Wiedemann signed an Executive ordering upgrading Townsville from a territory to a SAER.

As the sister of Queen Finny I, Wiedemann was briefly made Co-Prince of Excelsior, an office he shared with Silas Wurnbash, as Wurnbash's cousin was named Crown Princess by the government. After the January monarchy reforms of 2021, both abdicated.

Wiedemann became a citizen of Gapla on 26 August 2021, and has been known for his close Gaplan connections. In late September 2021, he was elected to the Gaplan Chamber of Representatives. He is the only Socialist Party representative in the nation's Chamber of Represenatives, and is regarded as a far-left fringe politician in the overwhelmingly centre to centre-right political climate within Gapla. He has also assisted in the revival of the Socialist Party, once again securing it as an influential Gaplan Party. He supported and endorsed Gaplan politician Chelsea Chen for President .

In February 2022, he created the Democratic Revolution Party of Gapla, a far-left radical party committed to completely changing the Gaplan societal and government system.

He has designed multiple symbols for the Government of Gapla, including the coat of arms of Gapla.

Former President Wyatt Seungri Baek gave Wiedemann the Order of the House of Baek and made him a Baron of Gapla in 2021. He was appointed to the Gaplan Reformation Council in April.

Wiedemann has been described as a "close Pickles ally", in reference to Benjamin Pickles, and a "rising star in the NPP" by the GNC, as he was a member of the New Progressive Party. He has refused to join any campaign staffs for the 2022 Georgienstinian presidential election, and has said that he will not be endorsing any of the current candidates. When elected, he stated one of his priorities was to repeal the Georgienstinian DOMA as a representative. On December 5, 2021, on his first day as a representative, he proposed the "Marriage Equality Act" which would repeal the DOMA. He later proposed a more modified version, the Second Marriage Equality Act. Both acts failed in Congress. In January, after the departure of May Junkin from Georgienstine, he was elected Minority whip to replace Benjamin Pickles, who was elected Minority Leader. He later dissolved IBB Media and created The Times of Georgienstine, a left-leaning media group focused on news and polling.

Wiedemann helped campaign for Vision Georgienstine in the January 2022 Georgienstinian congressional election and was placed 3rd on the Vision Georgienstine Congressional list. On 30 January 2022 President of Georgienstine Raphaël Olivier announced Wiedemann as his nominee for Secretary of the Treasury, citing shared beliefs on micronational economics despite highly different views on macronational economics, and bipartisanship, after a thorough selection process. Tom Mark also publicly endorsed Wiedemann for the position, as well as Benjamin Pickles. Isaiah Burdette criticized the pick, calling Wiedemann a "deep state pickle" and claiming Olivier had not done enough to stop the "Deep State Pickles". Andrew Perdomo also criticized the nomination, citing Wiedemann being a socialist, as GF, Olivier's Party , is a right-wing party, and saying there were "better options".

On 3 February 2022 he was re-elected Minority Whip of the National Congress. He was also appointed co-spokesperson of Popular Unity after the New Progressive Party was reformed.

After an unsuccessful campaign for Governor of Augustine, he was made Lieutenant-Governor by Governor Andrew Perdomo.

Wiedemann was named Benjamin Pickles' running mate in the 2022 Georgienstinian presidential election as the presumptive nominee for Vice President for Popular Unity on 12 April. During May of 2022, while Pickles was occupied and was not active in Georgienstine as often, Wiedemann acted as the leader of the opposition, campaigning for Vision Georgienstine and holding press conferences and a town hall. Wiedemann was also made Secretary of the Economy after the passage of the Cabinet Restructuring Amendment.

Wiedemann became a citizen of Benjastan in 2021. In November 2021, he launched his candidacy for President of Benjastan, running a pro-activity Benjastanian revival platform. His campaign was paused when Benjastan entered nationsleep.

Wiedemann became a citizen of People's Republic of Neptunia on 23 February 2022. He contested his first elect for the House of Representatives in March and was elected 4 March. He pledged to support President Aimée Lefebvre's legislative agenda. On 5 March, he announced he would run for Speaker of the House. He was elected unopposed the next day. Wiedemann also served as House Leader of the Workers' Party of Neptunia. Wiedemann left Neptunia when it dissolved in March 2022.

Wiedemann holds many citizenships, including:

Wiedemann resides in Brooklyn, New York, with his family. He is an atheist. His family is of Brazilian, German, Scottish, Italian, and Greek descent, and he has moderate fluency in Brazilian Portuguese. His personality type is INTP-A.

- in a speech founding the DSP.