This page is dedicated to the symbols of the Democratic Environmental Society of Senya.

The Flag is the second flag of Senya, after the first one was wiped off a computer memory after a virus. Barnaby Hands created the new flag on the 11 November 2010. The flag is predominantly Green, to represent Hope, But it is also the favourite colour of the President. DES Senya is written on the flag for obvious reasons. In the ensign, there is a Green oblong shape with a triangle taken out. This is to represent the climb that the micronation has got to gain full independence. The two yellow stars at the top represent the President and the Senyavite.

The Coat of Arms 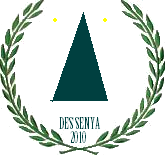 The coat of arms features a Teal Green triangle in the middle of some flowers. The Flowers stand for unity. The Triangle represents the climb to independence. The Two yellow dots are for the President and the Senyavite. DES Senya 2010 is written towards the bottom. This is to represent the name of the country and the year it was founded in.

This was the original flag of the Democratic Environmental Society of Senya. When a computer virus hit the computer, it was lost, but found again after a rumage around wikipedia.

This is still work in progress!