A military is an organisation with the pejorative to defend a country, nation and other entities, by combating threats to that which it is defending. A military may also incorporate aspects of law enforcement, government and other roles normally attributed to other organisations. In micronationalism, a military force is either entirely fictional, incorporates fictional elements, or is entirely factual but rarely possesses the ability to carry out military operations due to constraints of macronational law.

The first recorded use of 'military' was in the 15th century. The word is derived from the Latin 'militaris', from the prefix 'milit-' and the word 'miles' (meaning 'soldier').

Common roles of the micronational military 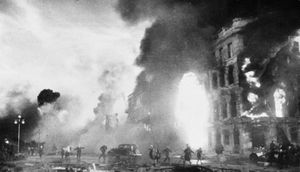 The military's primary function in macronationalism is to defend an entity, often in a military conflict. In micronationalism, this function is largely non-existent.

Each military force in each micronation has different functions. In some, the police force is linked to or is entirely the military force of the micronation. Military roles are also dependent on resources available, manpower and legal constraints.

Some common roles of micronational military forces include:

Militaries, both micronational and macronational, are almost always guided by a strict organisational structure.

Military commands are headed by an overall supreme authority. In some cases, it is a single person, like a dictator or a similar all-powerful figure. In other cases, it is headed by some sort of supreme command group, which co-ordinates and runs and entire military. Names often given to these headquarters include:

Below these commands are similar commands, depending on military units' names and resource allocations, but in a heirachial structure. This 'bottom-down' organisation allows for information to flow efficiently in both directions through the delegation of authority to suitable officers. Such commands may include Divisional Headquarters, Eastern Command and Battalion Headquarters.

As a general guide, however, the rank system of an army usually follows the following guidelines (in order of superiority from lowest to highest). For the air force and naval branches of a military, different ranking systems are used.