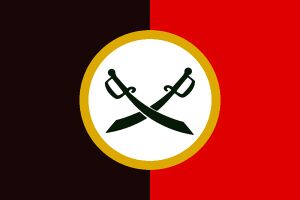 The Mervustan Provincial Guards was the collective name for group of soldiers and politicians, mainly from Mervustan but also from Lochrey, who opposed Andrew Brotherton, in his policies and actions in the First Brotherton Presidency.

During the 17thMayCoup and afterwards, James Irwin and his friend Kayden Conboy, with the support of Dean Merritt and others overthrew the President, Andrew Brotherton. James Irwin became the second President of Roscamistan, and stayed in the office from 18 May 2021 to 23 June 2021.

After the coup, James Irwin used his status to make Roscamistan more powerful. However he lost support as he was becoming corrupt. The spread of pro-Brotherton propaganda didn’t help him either.

Irwin and his supporters were unaware of the plan to overthrow him, it only became apparent after Andrew Brotherton made a plan to take Mervustan and overthrow Irwin. This plan was going to happen two days after 23 June 2021, but James Irwin resigned that day, and Andrew Brotherton assumed the Presidency. The “Mervustan Guards” collapsed, most of them became loyal members of the Roscamistan Defence Forces again. Irwin left politics, along with his Vice President Kayden Conboy. The Premiership of Mervustan and the Presidency of Roscamistan would never be the same.