From MicroWiki, the free micronational encyclopædia
(Redirected from MA)
Jump to navigation Jump to search
Not to be confused with Assembly of Micronations.

The Micronational Assembly, also known by its initials MA or M.A., is a micronational organisation that is presumed to have been founded in April 2016, on the now-defunct Google+ platform as a community with the objective of being devoted to peace and promoting the common good. The structure of the MA consists of the general assembly, judicial branch, council, and executive branch, which is defined by the MA Charter. The MA is currently active on Discord. The MA currently boasts 29 member states and 20 observers as of June 2021. The current Chairman of the MA is Fredrick M.

The original flag of the MA dubbed the "Unity Star".

Not much is known about the history of the M.A. on Google+ due to the shutdown of the platform on 2 April 2019. The Micronational Assembly is presumed to have been found in April 2016 as a Google+ Community by an unknown individual. It rose to prominence in 2017 after micronationalists such as Deron for Super President and Free Thoughts and Ideas joined the community. During this time, the MA was interconnected between YouTube and Google+. Later that year, Nicolas Miranda, one of the owners of the organization at the time, became the Chairman and established an absolute rule over the Micronational Assembly. The absolute rule was met with some opposition as subjected to the landmark legal case The People v Nicolas Miranda.

On 31 July 2018, the Charter of the Micronational Assembly was adopted which would significantly shape the modern structure of the MA. On 7 October 2018, Nicolas Miranda resigned as the chair and granted his position to William Wilson. During Wilson's term as chair, news spread about the shutdown of Google+, which led to the organization migrating to the first incarnation of the MA Discord Server.

On 9 March 2019, Tsar Stefan I became the Chairman of the MA under the newly developed voting system. From the beginning to mid Summer of 2019 the U.C.C.R-MA War (an ideological conflict rather than an actual war) was fought within the MA resulting in the expulsion of Zhujiang, the federative republic of the U.C.C.R at the time.

In August 2019, Würbec, a member state, declared war on Saspearian. After several days, a treaty was signed which ended the war. Emperor Anthony I received a message in which supposedly Würbec was attempting to puppet Saspearian. A few days later, he was invited to a group chat with two other people in regard to what to do with the supposed hostility. One of the members insisted on declaring war on Würbec. Others found out about the group chat, and as a result, Emperor Anthony I was kicked out of the Federation of the United States server, despite Anthony I not agree to declare war on Würbec. Emperor Anthony messaged Corvin I to inquire about the events, with Anthony I accused of espionage as a result. The Terran Civil War had begun as a result of the tensions between Saspearian and Terra. It was agreed upon for the nation of Terra to dissolve to resolve the conflict. The Terran Civil War continued on until it ended later that month. Emperor Anthony I accused certain members of harassment, leading to a trial that resulted in Anthony I's expulsion from the MA through executive order. In December 2019, Robert Williams IV's Discord account was permanently banned from the platform due to the account being reported. It was speculated that Emperor Anthony I was responsible for having the account removed, due to him having stated that he filed a report back in August 2019 due to harassment. As a result, the second incarnation of the MA Discord Server was made. 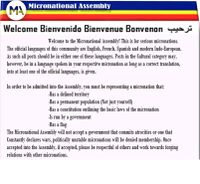 The welcome and rules from the Micronational Assembly Google+ Community.

In February 2020 the Second Charter of the Micronational Assembly was adopted, which was signed by Robert Williams IV. On 24 February 2020 the voting for the MA Council Election of February 2020 was held, later that same day Emperor Anthony I was unbanned from the MA after Robert Williams IV pardoned him and Natlin became the chairman. Then on 17 July 2020, The second incarnation of the MA Discord Server was deleted due to an unknown reason. The MA Council Election of July 2020 was held on 29 July through 30 July 2020. Hunt P. was elected as the chairman via council vote and election, beginning his term on August 1. His term would introduce weekly meetings and a multitude of other things but was rife with controversy. The third incarnation of the MA Discord Server was deleted out of Hunt P. due to boredom. He later resigned for the same reason of boredom and appointed Tsar Stefan as the next chairman. On 30 January 2021 Isaac J. White attempted to nuke the discord server to instate his opinion that the assembly should be put to rest for a number of reasons regarding the council members that would be elected. Tsar Stefan I was re-elected to a second consecutive term as the Chairman on 31 January 2021 by the majority of the Council Members who were elected in the January 2021 Election. Connor Shaw v. The Council of the Micronational Assembly was a court case that took place on 20 February 2021 and was a countersuit to a case that was supposed to occur the same day. The declaration of suit against the council was as follows: "I am suing the Micronational Assembly for attempting to extra-judicially overrule and undermine the MA Charter by allowing a Justice to hold public office." The defendant consisted of Connor Shaw, supported by his lawyer Hunt P. as a legal team. The prosecution consisted of Anthony I, representing the Council of the Micronational Assembly. The Chairman was notably silent for most of the trial, which was pointed out by multiple delegates. A jury was selected from delegates in the Assembly to decide the verdict of the trial. Initially, the trial was disorganized and delayed as the illegitimate Attorney was absent until 30 minutes after the trial began. After both the defense and prosecution presented their evidence with some debate, the jury conferred and came to a decision. It was the decision of the jury that the council was breaking the charter, and subsequently, the Jewel Republic was stripped of powers as an attorney. The Herzetian delegacy was later appointed as Attorney by the chairman.

The General Assembly is the main legislative organ of the Micronational Assembly, which is comprised of its delegates.

The Chairman serves as the head of the organization and is a part of the Executive Branch. The current Chairman is Fredrick M..

The MA Council is a legislative body that votes on propositions for the MA and votes on membership applications, the council was formerly assigned to represent a certain region across the globe such as the Eastern Coast of the United States or Europe.

The Micronational Assembly Trade Union (MATU) was an organ of the MA that existed from around 2016 to 2019, with the objective of trading. Despite it being an organ of the MA, the MATU was open to both member and non-member states.

The Scribe is a writer who reports on recent events that concern the Micronational Assembly.

The Court is the Judicial Branch, which according to the Charter, consists of 5 delegates.

The (U) Unum was a currency created by the MA sometime between 2017–2018, the symbol for the currency is the letter "u" with a strike-through, the exchange rate for 1 Unum equalled to 0.5 US Dollars.

Member States are the Delegates of the General Assembly and have the right to draft, propose, and vote on resolutions.

Observers are micronations or individuals that cannot vote in any propositions.