Kruaslavia, officially known as the Autocratic States of Kruaslavia, is a landlocked micronation located in the Australian state of New South Wales (and allegedly the highlands of Papua New Guinea). Kruaslavia was formed on 11 April 2021 by Lenard McDaid.

Kruaslavia was formed on 11 April 2021. An advisory council, which consisted of two advisers that advised the Chairman on matters regarding said government, was formed around this time; on 18 May 2021, it was abolished and replaced with a President.On the 28th of May 2021 the Autocratic state of Kruaslavia had its name changed to the Autocratic states of Kruaslavia mainly because of its land in Papua New Guinea.On the Monday the 21st of June The capital of all provinces in Kruaslavia had it name changed form Sloneland to Daidland after a fallout between The Chairman and another leader with the name now having Daid at the start to resemble the Chairman's last name McDaid.On Monday July 12 the President Hudson Franklin was removed from power by the Chairman become a regular citizen. On Tuesday July 13 the title and role of president is changed to General Secretary the position of Special inquisitor is rendered obsolete by the chairman. On Wednesday July 14 Hudson Franklin is reinstated by the Chairman to General Secretary formally President of Kruaslavia.On Wednesday the 11th of August the position of General Secretary was decreed obsolete by the Chairman though the position holder (Hudson Franklin) had not been making any decisions for quiet some time.

Kruaslavia is an autocracy, with most power being vested in the Chairman; as of April 12, 2021 the position is held by Lenard McDaid. The position of President, which replaced the earlier advisory council that existed between April and May 2021, is currently held by Hudson Franklin since 18 May 2021. The government also consists of a Special Inquisitor - a ceremonial title - which is currently held by (Melissa) McInerney, who was an advisor prior to the dissolution of the advisory council.

Kruaslavia consists of three states Yuetown and Jonesville within Australia and Krateview in Papua New Guinea. The capital of all provinces is called Daidland which is in Yuetown and the official residence of the Chairman.

The military of Kruaslavia is commanded by Thomas Lenahan, who was made head of the military on 22 May 2021 and holds the position of General of the army and Melissa McInerney formally being the Grand Inquisitor is in charge of ceremonial Military services though not holding the tile or job and still representing the military in the Parliament of Kruaslavia though on the 10th of August being reinstated and with the help of the chairman creating the Inquisitors.

All Citizens of the Autocratic state of Kruaslavia are classified as reserve military personal and can be called upon at any time to defend the security and safety of the country and the Chairman.

Kruaslavia for quite a while has had tensions with Xemonum which is a micronation that has insulted and attack our nation The insult being not recognising us as a ligament micronation despite the fact that we are the only micronation that has talked with them or recognised them and the attack being escalating tension unnecessarily and without cause by apparently cutting of trade which had never been established and threatening Kruaslavia with war for no apparent reason beside targeting a less populated micronation and asserting its dominance over all this micronation is only a bully only wanting attention through aggression and war. Xemonums leader Jake Robinson or The great ruler of Xemonum is a dictator with a apparent population of 40 people and believes he has claimed an island in Indonesia. 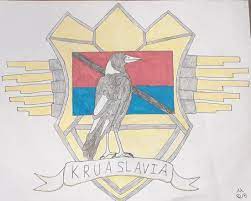 11 holidays are recognised within Kruaslavia. In order of the month that a holiday takes place (January to December), they are:

Kruaslavia strives for diplomacy and recognition through out the micronation community and to share its ideals of strength and determination of its citizens and leader.