Jackson P. Cole (born 27 November 1999) is a politician and President of the Kid United Republic.

On a quiet day in Moscow, Russia. Jackson P. Cole was born in a Moscow Hospital on November 27, 1999. The reason why he was born in Moscow was his Dad was studying in a Moscow university soon we met his mother and married. Before Jackson's Dad finished his degree, Jackson Cole was born. After living in Moscow for another year, to finish his mother's citizenship paperwork. Following this the new Cole family moved to Salt Lake City with his cousins. For the next two years Jackson lived in Salt Lake until Jackson's Dad found a job in a nearby town next to Sacramento, CA. Presently Jackson Cole lives next to Sacramento, CA and enjoys life as a businessman and a micronationalist.

In 2011, Jackson made friends with a former Micronationalist named Dixon Richards who asked Jackson to help him start a new micronation called the Kid United Republic and for the name sake of the country Jackson was 12 at the time (So you can see why they called it that.) Following this Jackson fell in love with the micronation and saved money to develop it. Later, Jackson became the XFA Director and later became Secretary of Defense for the new nation. When August 12, 2011 arrived KUR was attacked by bullies and Jackson joined the new formed KURA (Kid United Republic Army) to fight the "Bully War". Serving his several long months of service, Jackson retired to do his governmental duties.

Later, on the second election, Dixon Richards asked Jackson to be his new Vice-President. Unfortunately, spending three months in office Richard left and resigned due to unrelated reasons. This made Jackson become the new President and Jackson asked Dieter Chapman to be his new Vice-President. Jackson ordered that to be a good micronation it needed to become visible to others. After along wait, in 2014 Jackson signed up on MicroWiki later in 2015 on the MicroWiki Forum. 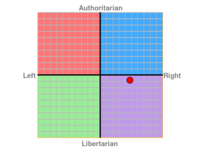 Jackson Cole on the political compass.

Lt. and Commander of the QAU (Quailians' Abroad Unit) in the Imperial Army.