The Grand Theft Auto V affair was an incident involving several micronationalists which centred on the underage Leon Montan owning the mature game Grand Theft Auto V. The affair began on 28 January 2020, when Jayden Lycon confronted Montan with a sarcastic message, with Zabëlle Skye and Leon Montan then joining. The affair escalated on 4 February 2020 after intervention by Aidan McGrath. The conflict ended the following day, and Montan uninstalled the game soon after the controversy died down.

The affair spawned various pop culture mediums, including a film and expansion for the game 911 Operator. Since the incident, various attempts were made to alert the Coast Guard relating to other underage players playing Grand Theft Auto V, with minimal to no response from the organization (except on 15 October 2020; see below).

Grand Theft Auto V is a 2013 action-adventure game developed by Rockstar North and published by Rockstar Games.[1][2] The Entertainment Software Rating Board, also known as the ESRB, rated this game as mature, due to its use of blood, nudity, language, alcohol, etc.[3] On 26 January 2020, Leon Montan complained to TOES concerning his slow download speed when downloading the game.[4][5] This was noticed by Lycon and was later confirmed by Montan on 27 January 2020. As Montan was 13 at the time and the ESRB having jurisdiction in his area (that being North America), it would have been against the rating to play the game.[6][7]

On 28 January 2020, Jayden Lycon, then-commander-in-chief of the Aenderian Coast Guard, issued a sarcastic warrant notice named "delete gta V"' stating that Montan would be arrested for downloading Grand Theft Auto V while being underage. This was despite Lycon having no jurisdiction over Montan, and also owning the game himself while underage. 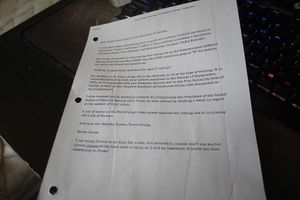 the Aenderian Coast Guard issued a warrant that we found you downloading grand theft auto V but it says it is rated for mature and leon montan page says you are 13 so uninstall or else we will arrest u Jaydenfromcanada (talk) 01:31, 28 January 2020 (UTC) 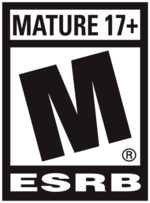 ESRB's mature rating, for games rated 17 years and older, which GTA V got rated as.

Zabëlle Skye of New Eiffel would also criticize Montan shortly after. A day later, the message was received by Montan and he later responded, preparing the National Liberation Army to intervene Jayden Lycon's buttocks. The conversation was later forgotten.

On 4 February 2020, Aidan McGrath from Paloma intervened, criticizing Lycon for threatening to arrest Montan despite having no jurisdiction and that Lycon would just start even more drama. McGrath also challenged Lycon to do the same, as McGrath owned a copy of Grand Theft Auto V and was lower than 18[8] (despite the fact that the game is rated 17 or over).[3][9] In response, Lycon sent an image of Carl Johnson from Grand Theft Auto: San Andreas,[10] later removed by McGrath 26 minutes later.[11] Zabëlle Skye later threatened war between New Eiffel and Paloma, which McGrath scoffed at. Afterwards, Montan and Smith told McGrath that the whole conflict was purely non-serious and a joke. Zabëlle would later inform that New Eiffel was mobilizing 200 troops armed with Nerf guns in an attempt to assassinate Montan, despite the fact that the United Armed Forces lacked the resources to fulfill such a task. Cole Baird from Wegmat later criticized Montan for downloading the game and was planning to sue Rockstar Games for the bad game.[8] 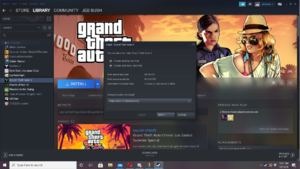 Montan showing interest in re-installing the game on 15 October 2020.

The affair was largely joked about within TOES, as well as in private correspondence between Lycon and Montan. Montan would later delete the game near the end of the affair as he didn't like the game, as well as taking too much space on his hard drive.

On 19 June 2020, after rediscovering the chat, Lycon noticed that McGrath challenged him to do the same with him. There were plans to start another conflict, with Lycon mailing Justin Trudeau,[12] the Prime Minister of Canada,[13][14] for military assistance using his powers prescribed in the Statute of Westminster, 1931,[15][16][17] including a request to declare war on Ponderosa Hills and Paloma despite the fact that Aenderia does not hold a military treaty between Canada and Trudeau not having jurisdiction in Michigan, the state where McGrath resides in. As McGrath reached the threshold of 17 to play the game on 7 July 2020, as well as no response from the Canadian government, plans to continue the war were scrapped.

On 24 June 2020, due to unclear communication, the affair re-escalated[18] but was later corrected by Lycon.[19] No fighting was conducted but the Cubian DEFCON system was tripped due to this incident.

On 15 October 2020, Montan showed interest in re-installing Grand Theft Auto V,[21] leading to the Aenderian Coast Guard to transmit various messages to allies including Essexia, Iustus, Yu-Xia, and Jamez for assistance to the possible conflict.[22] An invasion plan to various parts of Ponderosa Hills was also drafted later in the day,[23] crossing through Highland Creek to invade Lafreniere, an autonomous province of Ponderosa Hills west of Aenderia.[24]

On 13 November 2020, Lycon received a reply from the letter he sent in June 2020 regarding the affair from the Office of the Prime Minister of Canada.[25] The letter later got 3.4 thousand upvotes on Reddit.[26] On 18 November 2020, Montan was playing Grand Theft Auto V without intervention from the Aenderian Coast Guard.[27]

The incident was mostly only known to the people who were involved in it. Though, there have been some micronations who have reacted to this incident. As Foreign Minister of Iustus, Lycon attempted to add a statement on behalf of the Empire of Iustus but was later denied by Austin Jaax.[28]

A transmission was sent by the Coast Guard after receiving a notice stating that Montan was going to download Grand Theft Auto V, with a few micronations responding to the transmission.

The conflict has appeared in a film of the same name, made by Lycon on 21 November 2020, featuring the microball versions of both Aenderia and Ponderosa Hills. The film parodies Garfielf by PilotRedSun and American Revolution / Independence in a Nutshell by Kaliningrad General as it features poorly drawn art and the same text to speech software.[31]

The film uses animations from Microsoft PowerPoint and is made to look like a PowerPoint presentation. The countryballs were made on Paint 3D and were purposely drawn badly, like in both Garfielf and American Revolution / Independence in a Nutshell; with the latter being heavy inspiration of scenes for the movie.[32]

Though the film was based on the conflict, the film overlooks and adapts various historical events, including:

The film garnered 201 views within its first 50 days, with Lycon gaining 4 additional subscribers.[33] Isaiah David described the movie as being the "best movie [he has] seen in [his] life".[34] 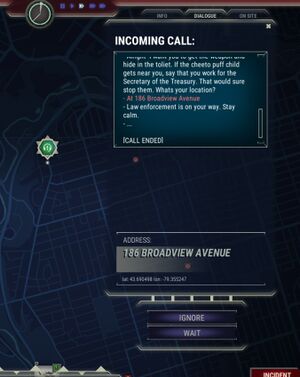 On 13 January 2021, a user-generated expansion for the game 911 Operator was uploaded to the Steam Workshop based on the Grand Theft Auto V affair. The expansion was developed by Jayden Lycon.[35]

Whilst working on his Macbeth assignment,[36] Lycon began working on the modification. The modification was later finished and published on the Steam Workshop 35 minutes later.[37] Though it did not include voice-overs, the Workshop description states that they are "in development". No update, however, has been made since 13 January.[38]

The modification adds a call to the game where a 911 call from a parent, reporting that their 9-year-old child is playing GTA V underage. The player would have various options to respond- these include:

The former is inspired by what McGrath said during the conflict. Various scenarios can appear, ranging from the operator asking if the caller knows who Marsellus Wallace from Pulp Fiction is (a reference to a scene from the movie[39]), to the operator telling the caller to lie about working for the Secretary of the Treasury.[40]