From MicroWiki, the micronational encyclopædia
(Redirected from Flag of the Timonocite Empire)
Jump to navigation Jump to search

The Timonocitian Flag, or the "Great Truth of the Motherland" is the flag of the Timonocite Empire. 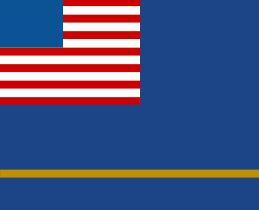 Historic flag of the Timonocite. 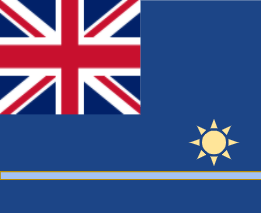 Historic flag of Timo. Notice the Union Jack, the sun, and the blue river with golden banks.

SEnteral Excitement began as a town in the United States, so it made sense to put an american flag on the top. The SEnteralexcitementians did not put the american stars, due to that symbolising the 50 US states. Both sides quickly picked up many British things, including British English, British Dates, etc. Timo chose a flag with a Union Jack. The bottom river became blue with golden colour borders. A sun was added too, from which the modern flag of Timo was inspired by.

Realising how the flag was inapropriate for a nashun secceding the US, in late October 2019, the SEnteralexcitementian flag was now the current flag. The river was removed, as it does not represent anything. Timo kept its flag for a few months, until Eshaan designed a new one with the Timonocitian flag as a canton with a shield replacing the sun. This quickly became the current Timonian flag.

This flag, based on the American flag, has eighteen stars for microprovinces. There are five golden stripes, symbolising unity between the regions.