The flag of Vlasynia (Romanian: drapelul Vlasiniei) is a tricolor with horizontal stripes. The outermost two stripes are blue and envelop two golden stripes which themselves envelop a larger black stripe in the middle, whose height (width) is thrice that of the others. The black stripe in the middle also hosts the coat of arms of the Vlăsceanu Family, which is also the lesser coat of arms of Vlasynia. It has a width-length ratio of 2:3. 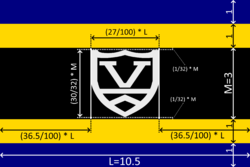 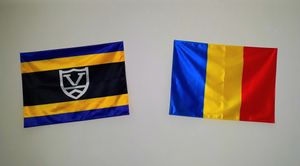 The Vlasynian and Romanian State Flags hoisted in Divellis, as a symbol of the bond between the two nations

The flag was initially conceived to have the same colours as Romania's flag, despite the fact that Vlasynia's flag has had different shades of red, yellow and blue. When it was changed on 24 October 2018, the red band in the middle was recoloured to black, in order to represent the influence of the Vlăsceanu family.

It has been redesigned four times since its creation. The first time was on 8 January 2018, when the Divellion was first introduced, alongside darker shades of red, yellow and blue. The proportion of the flag was also changed. The second time was on 9 January 2017, when the initial shades of red, yellow and blue were restored, and the proportions of the bands was again modified. The banner, however, was kept (despite suffering minor changes). The third time was on 24 October 2018, when the central red band was replaced by a black band, the ratio of the flag was changed from 5:9 to 2:3 and the Divellion was replaced by the Coat of Arms of the Vlăsceanu Family. The fourth time was on 9 March 2020, when the proportions of the horizontal bands were slightly modified, the shade of yellow was changed to a more golden-like aspect and the Coat of Arms also suffered minor changes. On this date the proportions and measurements of all the elements on the Vlasynian flag were standardized for the first time.

On 5 June 2020, the national flag of Vlasynia was first hoisted, alongside the State Flag of Romania, in the nation's capital, Divellis.