The flag of Losisland is a horizontal bicolour formed of a white triangle in the left side and a white cross in the right side, enveloped by four blue quarters.

The flag was adopted by the Captains Regent the 4th of September 2010, during the Days of Independence of Lostisland.

Old flag of Lostisland, used before the independence.

Although current flag of Lostisland doesn't have a very long history, its pre-history can be traced until the 2009, when the flag of the Lost Island roleplay game was presented. That flag was used in the all official documents of the Lost Island.

After the Days of Independence started, the new flag became necessary. And at the 4th of September 2010 Yaroslav Mar presented the new flag, which is now the current flag of the Republic.

The colors of the flag—blue and white—are symbolizing the openness of the Republic to the new ideas and discoverings, the blue sky of Lostisland and the waters of the Pacific ocean where is located Lostislandic territory. 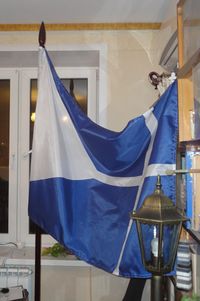 Flag of Lostisland in the Residence of Captains Regent

The original flag of the Republic is placed in the Residence of Captains Regent and is used during all official events and meetings of the Lostislandic government.

The flag ratio is 1:2 (height/width). Recommended colours are: