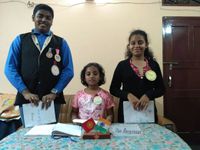 The Fifth Dhrubajyoti Roy ministry (Hindi: पाँचवाँ ध्रुबज्योति रॉय मंत्रिमंडल) was the 11th union council of ministers of Vishwamitra which was formed after the resignation of Tanishkaa Patranabish as the Prime Minister and leader of the unity government. The ministry was formed on 25 December 2017 under the premiership of Dhrubajyoti Roy who had earlier stepped down as the president to take over as the prime minister. The ministry remained in office until its dissolution following the 2018 general election.

The ministry was formed after the resignation of Prime Minister Tanishkaa Patranabish as the leader of the unity government in order to pave away for Dhrubajyoti Roy to succeed her as the leader and hence the prime minister. Roy, who was serving as the President since April, had announced his resignation in order to join the politics and led the nation's government. He was succeeded as the president by Vice President Anoushkaa Patranabish.

Notable inductees included Bhargab Jyoti Medhi who was the Governor of Uttar Guwahati and had resigned in order to be sworn-in as a minister. The Lieutenant Governor of Basistha Mridul Amin had also resigned from his position in order to be join the council of ministers.

The following were a part of the Second Tanishkaa Patranabish ministry but were not included in the Fifth Dhrubajyoti Roy ministry. These includes:

The following tables represent the demographics of the ministers.

Representation of ministers by party