The Federal States of Delphia, also known as simply Delphia, is an American Micronation that is located in Minnesota which was established on 16 January 2017, but was conquered by Seldavia and Sondonesia, the Delphians would later declare independence from Sondonesia on 26 April 2020. The official languages that are spoken in the country are considered to be English and Spanish, the nation uses the US Dollar as currency, it's current government system is considered to be a Federal Democratic Republic. With has a total population of 20 and its capital is Dunpin.

Below is a list of branches/agencies within the Delphian government

Delphia's land is comprised of 6 states. 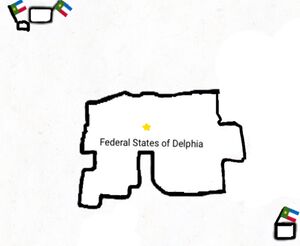 A map of the Delphia