The Federal Union of Juclandian Lands (Romanian: Uniunea Federală a Țărilor Juclandeze), shortly Federal Juclandia, is a supranational union consisting of 3 member states. The union spans over two continents, with member states in Europe and South America, and it is surrounded by Romania, the United Kingdom, France, Venezuela and Argentina. All its member states landlocked countries, and together they comprise an area of about 3,000 m2 (32,000 sq ft). The federal population of 52 citizens is mainly concentrated in Juclandia and Sabia and Verona.

The Federation was established on 23 February 2014, after Lenia and Sabia and Verona seceded from the Kingdom of Juclandia, in order to form together, with other five territories, a union of states. The date is celebrated anually as a National Day, along with 23 August, a date which represents Juclandia's independence from Romania in 2008. The origins of the Federation go back to as far as 2001, when one of its provinces, Juclandia, is traditionally considered to have been founded. On the international level, the Federation has inherited Juclandia's memberships in the Grand Unified Micronational and the European Micronational Culture Organisation. Federal Juclandia comprises three main linguistic and cultural regions: Romanian, Spanish and English. Therefore the Juclandians, although predominantly Romanian-speaking, do not form a nation in the sense of a common ethnic or linguistic identity; rather, the strong sense of identity and community is founded on a common historical background, shared values such as liberty, federalism and democracy, and the presence of plush toys as provincial citizens, which are an important cultural asset of both Juclandia and Sabia and Verona, important provinces of the Federation. In summer 2014, Frieden seceded from the Federation, and in February 2015 Lenia rejoined Juclandia as an autonomous state, events that brought the number of provinces down to six.

The Kingdom of Juclandia has historically been made of both human and non-human citizens, plush toys, which has given the Kingdom a widely established recognition of this aspect. Moreover, legislation in the Kingdom has never treated humans and plush toys differently, which meant that there was a wide confusion in regards to political offices and elections. Certain customs have developed over time, that have created a de facto separation between plush citizens and human citizens, but the core issue has never been resolved. One of the solutions found to resolve the problem was the creation of two separate regions in 2008, when Juclandia, back then a young socialist republic, was divided in two regions: the region of Juclandia and the region of Cipimania, with the region of Juclandia being later further separated into the region of Jucăreni and the region of Nisipești. The region of Juclandia consisted of all plush toy citizens, while the other ones were exclusively for human citizens. However, the central government in Jucărești, which consisted of plush toys almost exclusively, still held considerable influence over the human regions. When the Kingdom of Juclandia was divided into states and territories in August 2012, giving its subdivisions considerable devolved powers, it seemed that the problem was resolved, and the central government in Jucărești played no part anymore in the affairs of Lenia and Nisipești, the two resulting human-only provinces.

However, as months passed by, it has been realised that the central government was still having an important degree of influence over Lenia's internal affairs, and some in the local government in Lenia started calling for the creation of a dualist state on Austro-Hungarian model between the plush provinces and the human provinces. At the same time, Juclandia was expanding rapidly overseas, gaining as territories Tianita, Sabia and Verona, Ayrshire and Frieden. In the mainland, the micronation gained proeminence in the local community, and having received some citizenship requests from non-residents, the King of Juclandia, Ciprian, affirmed that the country needed more provinces in order to let the new citizens take part in the country's internal affairs. On the other hand, after August 2013, the citizenry of Lenia became increasingly inactive, and over 10 human persons had their Juclandian citizenship revoked. In November 2013, the first calls for the formation of a federal state were made. A preliminary report, written by King Ciprian, suggested the formation of a federal constitutional monarchy with the King of Juclandia as its head of state, and the then-Kingdom to be divided into three mainland provinces (Jucăreni, Lenia and Nisipești) that were to join the overseas territories and some new provinces in order to form together the United Kingdom of Juclandia, later proposed to be renamed to the United Lands of the Juclandian Crown.

The Federal Constitution of 23 February 2014 is the legal foundation of the modern federal state. It outlines basic and political rights of individuals and citizen participation in public affairs, divides the powers between the Federation and the provinces and defines federal jurisdiction and authority. There are three main governing bodies on the federal level: the Federal Obștea (legislative), the Government (executive) and the Federal Court (judicial).

The unicameral legislative assembly of the Federation, the Federal Obștea (untranslatable; assumed equivalents: Federal People's Assembly or Federal Council), has 17 representatives, elected through first-past-the-post system in single or multi-member constituencies, depending on the population of each province. The Federal Obștea enjoys wide legislative powers, and the system is often considered one of parliamentary supremacy, altough every federal citizen may challenge any law passed by parliament and trigger a referendum.

The first and only Federal Cabinet in history consisted of the following departments and ministers:

In the Federation, there are two kinds of citizenship: federal citizenship and provincial citizenship. This came as a result of prolonged discussions in regards to the future of the plush toys in the country, as most human citizens were discontent with humans and non-humans having equal status in the Federation. As a compromise, it was decided to split the citizenship in two: federal for humans, which would give them full political rights in the Federation, and provincial for non-humans, which will not have any federal-level rights and it will be up to the particular provinces to set the legislative background for. 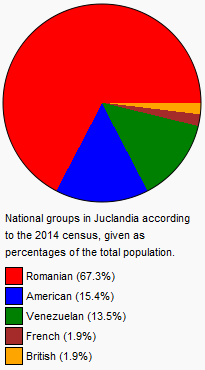 As a multinational country, Federal Juclandia is both ethnically and religiously diverse, but Romanians and Orthodox Christians make up a majority of the population, due to the country's Romanian influence.

A majority of the federal citizenry lives in Lenia, Leonida and Sabia and Verona, with the rest of the regions being sparsely populated. However, Juclandia presents the highest population density per square meter, due to its relatively small size and a high number of provincial citizens, although if those are not counted, Juclandia does respect the median population density around the Federation.

As Romanians constitute two-thirds of the population, the main language used in administration and day-to-day life is Romanian, altough the Constitution does define English and Spanish as recognised languages, and official documents are usually also translated in these languages.