From MicroWiki, the micronational encyclopædia
(Redirected from Enok)
Jump to navigation Jump to search

Moravia, formerly known as Enok, was a Vlasynian Province situated in western Bucharest. It was comprised of 5 Districts and 2 Settlements (one Fort and one Town) and shared land borders with Romania to the north, east and south and with the Giulium Province to the west. Its territory covered the entire northern coast, almost the entire west coast and a portion of the south coast of the Lacul Morii Lake ("Mill Lake"), as well as the Angels' Island (Insula Îngerilor), located in the northern part of the lake.


Moravia was one of the earliest established Vlasynian territories, as its first iteration was formed on 2 July 2018 as Fort Ested (today known as Fort Canis).


It was abolished on 1 August 2021, following the dissolution of the Vlasynian Despotate. 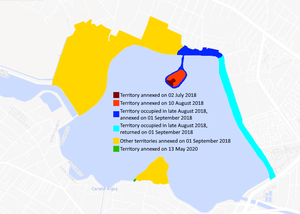