The Eniarkian Military is the main defence of the Democratic People's Republic of Eniarku on land and from the sea. They are led by the Chairman of the Central Military Commission, the Commission itself, the National People's Commission for State Defence, the Executive Commanders of the Forces, and the Central Discipline Commission.

The Eniarkian Military can trace its roots back to even before the republic's original founding. For years and years, there has been a de facto "military", of which has been training and performing missions and operations for as long as most people in Eniarku can remember. When the People's President and Premier were younger, they would always have mock fighting battles in yards and houses, but it never really had a sense of organization and was just for fun. But, now that the Democratic People's Republic of Eniarku was formed, all of the "play" turned into an actual military operation.

After Eniarku was officially formed, their was a scramble to prepare the government, and so, the military was left aside. But, soon enough, the Eniarkian Congress set forth a bill that would completely enable Eniarku to have and maintain its own military. After that bill was passed, the Congress chose who they thought would be the most competent people to handle the jobs. And as such, Premier Mason Horn was appointed Marshal of the Army, while the People's President Aaron Meek was appointed Chairman of the Central Military Commission and Executive Commissioner for State Defence, as well as the Admiral of the Marine Corps and Navy (currently inactive).

Established by the Central Discipline Commission.

The Eniarkian Military is officially an organ of the Eniarkian Worker's Party and as such, has a place in the day-to-day affairs of Eniarku. But, this is extremely limited by the government during peace time, to prevent a possible overthrow of the government itself, which has the possibility to turn Eniarku into a military-run state. But, in war time, the government slightly releases its tight grip on the military, and allows it to assist the State for the better of the Proletariat Peoples of Eniarku. Overall, the People's Ground Forces (Army), as the largest branch of the Military, have the largest say in the politics and government of Eniarku. The Military is also a direct subordinate of the Central Discipline Commission, and as such must report all and any events that either are occurring or are going to occur within itself, and must adhere by all of its regulations.

At the height of the chain of command of the branches of the Central Military Commission, there is the Department of State Defence, most commonly known as DSD, which is the organization in charge of the defence of the State. It is composed of only the executive officers of the Ground Forces , Marine Corps, Navy, and Coast Guard/Border Guard. It only answers to the Central Discipline Commission and each of the branches receives its direct incentives from the institution, converting them to orders for military action to be taken by lower institutions within the Military. The head of the DSD is styled Executive Commissioner of State Defence.

The Democratic People's Republic of Eniarku's Military has a very strict and formal ranking system used to maintain order and control over the whole Military. Officers are awarded promotions and commands based on his/her own personal ability rather than their rank itself, but usually the person's rank is indicative of his or her skill level. All advances in rank are reviewed by the NPCSD, the Central Military Commission, and the Central Discipline Commission, and the Commander-in-Chief, the Commander-in-Chief having the final and unwavering decision.

The Democratic People's Republic of Eniarku has a system of military readiness, very similar to the United States' DEFCON System. It does not have a particular name, and is often referred to as just The Homeland Security Advisement System. Below, you can see the current level of military readiness. 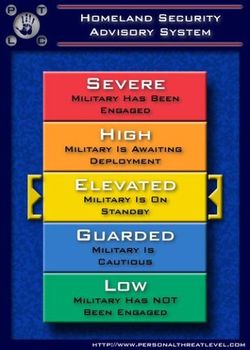