Amazon Lily[b 1], officially known as the Empire of Amazon Lily[b 2], is a massive global empire and supranational confederation of allied nations, feudal states and vassal states occupying the Amazon Lily's Island of Women and half of the world since the birth of the Empire in May 18, 1983.

Amazon Lily is a powerful absolute diarchy, where the Emperor and Empress are the sole supreme sovereigns of the Island and both heads of state and government. Amazon Lily's official languages are English, French, Ecclesiastical Latin (mostly for religious ceremonies), Japanese and Chinese (both Traditional and Simplified). The current sovereigns are Emperor Alexander Yamamoto and Empress Boa Hancock, founders and rightful sovereigns of Amazon Lily.

Established in May 18, 1983, following the "Proclamation of the New Order" and "Formation of the First Empire of Amazon Lily", the empire was formed when Emperor Alexander Yamamoto, a selfless religious zealot, felt that it was his duty and divine destiny to unite the world under a equal government in his name and in the Lord's name, and prove it when he declared the Formation of the Empire of Amazon Lily, thus ensuring the survival of civil rights and the Liberty, Equality, Justice. Emperor Alexander was crowned on December 2, 1983 at the Amazon Lily City Cathedral, many Amazonians have proclaimed Emperor Alexander as "Alexander Yamamoto, Emperor, Autocrat and First Among Equals of All-Amazon Lily and the World".

They proclaimed the Republic of Amazon Lily, and lead a series of reforms as guaranteeing the civil rights and civil liberties and the beginning of reparation of the capital. In September 3, 1976 (BRA 7), the National Convention organised a reunion about the establishment of a constitution. The Constitution of the Republic of Amazon Lily (also the Constitution of the Amazonian Republic) was signed and enacted with a President of the Republic as head of state and head of government and owner of the executive power with a benevolent military government. The Republic of Amazon Lily established multiple alliances like with the United States and the United Kingdom who were its supporters and now allies. The Republic send an Amazonian Expeditionary Force to the Vietnam War supporting the Americans and South Vietnam against the North Vietnam due of the strong presence of Anti-Communism in Amazon Lily, but were departed due of the defeat of the Americans and the decisive victory of North Vietnam that actually led the reunification and the formation, in current days, of the Socialist Republic of Vietnam. The Amazonian Republic suffered a Communist uprising, but again supported by the United States and the United Kingdom against the Amazonian Communists supported by the East European Communist countries and supported by North Korea in secret.

In 1980 (BRA 3), Amazon Lily faced a political crisis due of the incompetence of the Government of the Republic of maintaining order, justice and stability, the growing racist and communist movements and in the threat of a coup d'état or a civil war. Two months of the same year, a brilliant Egalitarian politician, a charismatic man of peace and a great admirer of Napoleon Bonaparte, Alexander Yamamoto, won the election with success and demand that he should exercise executive and legislative powers. He led a series of arrest of racist and communist followers, and the establishment of a strong and autocratic benevolent military dictatorship under his presidency. In August 2, 1981 (BRA 2) The Amazonian people, and the Senate proclaim Alexander Yamamoto President for Life and protector of Liberty, Equality, Fraternity of our Paradise. Alexander Yamamoto was venerated through a cult of personality for heroic actions like saving Amazon Lily from of a upcoming civil war and portraying him in similar fashion of Kim-Il Sung, but he stated that he's not a Communist and actually extremely anti-Communist as he's an United States supporter.

In May 18, 1983 (BRA 0), Alexander Yamamoto led a great speech after the event a group of Sith Cultists attempting of overthrowing him but he defeated them after revealing to them that he's a all-powerful Force-user and strongly skilled in Lightsaber combat, declaring that in order to ensure the security, the continuing stability and protection of Liberty, Equality, Fraternity and that the Republic will be reorganized into the Empire of Amazon Lily for a safe paradise, protecting liberty and securing their society and was proclaimed by the Senate in full of cheer and officially crowned in December 2 of the same year as Emperor of Amazon Lily.

The Empire of Amazon Lily under the incredible leadership of Emperor Alexander became a series of fighting against minor wars across the world by supporting the factions only if they are interesting on goodness, benevolence, equality and respect, helping them defeating their main enemies. The Empire of Amazon Lily became more and more popular around the world for his heroic actions of maintaining the world safe from terrorists and criminals. Suddenly the entire world proclaims the Empire of Amazon Lily as the rightful international peacekeeping government due of the incompetence of the United Nations having no military force as Emperor Alexander described it as the Second League of Nations who again like the First League of Nations have failed of maintaining peace and stability around the world and never have a military force, but due of the benevolence of Emperor Alexander, he decided to give the United Nations a chance under his advice and honorary leadership. 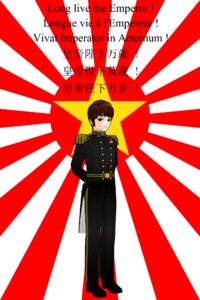 The Amazon Lily Imperial Constitution formally describes the Empire of Amazon Lily as an "Multireligious Theocracy" which all religions are permitted and supported by the Imperial Government, with Amazon Lily Catholic Church, Amazon Lily Episcopal Church, Amazon Lily Orthodox Church and Amazon Lily Imperial Cult as the Empire's de facto state religions, however the Constitution guarantees and protects the freedom of religion in the Emperor's name and extremely forbids religious discrimination. The Empire of Amazon Lily is characterized as an Esoteric Clerical Theocracy and Confederal Ecclesiastical Empire, said the Emperor is a Physical God and the Vicar of God and holy custodian of equality of citizens and possessing mystical abilities to heal and free his loyal subjects from Evil influences, and most Amazonians view the Emperor as the omnipotent incarnation of God the Father, the Son and the Holy Spirit.