From MicroWiki, the micronational encyclopædia
(Redirected from Ebenthali Reserve Force)
Jump to navigation Jump to search

The Royal Reserve Force (Portuguese: Força de Reserva Real), abbreviated as RRF, is the no-standing military force of Ebenthal. It was created through the Ebenthal's Bicameral Act on 8 March 2021 to replace the Ebenthali Armed Forces, which were abolished, as a solution for maintaining national security and reducing expenditure deemed unnecessary by the government. The RRF is made up mainly of civilians enlisted voluntarily or compulsorily, if necessary, at the call of the monarch. The RRF is subordinate to the Ministry of War and is headed by the holder of Ebenthal's highest military rank, the Field Marshal, while its commander-in-chief is the monarch of Ebenthal, who is the sole holder of the right to summon the force into activity at the request of the Prime Minister or if necessary. 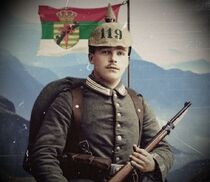 Crop of the first propaganda piece for the Reserve Corps.

From mid 2020 to early 2021, the Worker's Party have been campaingning for the abolition of Ebenthal's Armed Forces, described by them as an "unnecessary force in times of peace" and an "expenditure waste". The ideia was first brought up by Lady Gabriela, 1st Duchess of Frumar, the party's leader since 2019, in a parliamentary session in 9 June 2020, when she informally proposed the abolition of the military institution arguing that everything they did historically could have been done by other constituted bodies and still wouldn't justify the maintenance and expenditures of the forces when conflicts demanding military action are so scarce and rare. She was shunned by the Conservative majority as well as by some Moderate politicians who saw on the Armed Force part of the country's history and had cultivated respect for the institution.

In September the matter was brought again to the table by the 1st Marquis of Liuva, a Worker's Party politician, supposedly under the Duchess of Frumar's command, although his proposal was revised: he did not proposed the abolition of the military institution, but the abolition of all its branches but the Army and the end of the unilateral decision by the Ebenthali government to consider private security forces hired to protect land claimed by Ebenthal as part of the national military. On the occasion, the Marquis said that, as a micronation, there was no reason for Ebenthal to keep military force as it "couldn't actually be used in the country's defense against real threats". His speech sparked political and personal attacks towards him, as it was seen as a deep disrespect to the armed forces's history of fighting for Ebenthal in the ways possible for a micronation.

From then on, the matter cooled while the Worker's Party leader grew in popularity and forged an alliance with the Moderate Party's leader. Unconfirmed sources claim that the Worker's spoke with the Moderates outside of parliament in several occasions[citation needed] trying to convincing them into support the Worker's Party further proposals if they gained majority in parliament and acceded to government. In 8 March 2021 the Duchess of Frumar presented to the parliament her party's Ebenthal's Bicameral Act by which they proposed the installation of a bicameral legislature in Ebenthal, substituting the former unicameral legislature, including a democratic lower house. The Act also included the abolition of the military and the creation of a reserve force.[1] Supported by the Moderate Party, the Act was approved, most specially because the Moderates were so excited about the new parliament they ended up accepting the disestablishment of the former military institution, in what was later called by King Arthur II a genius move by the Duchess of Frumar.[citation needed] As the Reserve Force was created, although the Ministry passed to the Worker's Party, the command of the new force was to be designated by the monarch, who kept the Conservative Prince Fernando of Schwarzberg, an experienced micronational armed forces member, as commander and Field Marshal.

On 12 January 2022 a DDoS attack took down Ebenthal's government website for four days. On the same day government email and social media were hacked and the government email list was compromised, as well as their data was deleted and possibly trafficked, along with many documentary files. On occasion, the Royal Cyber Corps was summoned, having been able to repel the DDOS attack using the LOIC (Low-Orbit Ion Cannon) system. In a statement, the government did not disclose details about the attackers, decreeing secrecy until the investigation, in charge of the Defense Command of the Royal Reserve Force, was completed. On 9 February 2022 the event repeated itself, with a new, heavier DDoS attack that took six days to counter by the RCC, utilizing not only LOIC, but assistance from the Sucuri Security Partnership Company, which was able to stop the emails. of the government to have more information leaked.

In 19 April 2022 the RRFs were put on alert, more specifically the Royal Cyber Corps, with the beginning of Operation Mayhem, a joint diplomatic operation by the Conference of Santiago's most prominent heads against Kingdom of Manso in retaliation for his aggressive diplomatic policy of harassing Ebenthal's and Karnia-Ruthenia's allies, as well as citizens of the latter, of Mauritia and Quinta Velha.

The RRF is made up entirely of civilians who temporarily assume military ranks when called to activity by the Sovereign. Civilians 14 years of age and older are enlisted and must present themselves voluntarily or through mandatory conscription, if necessary. When summoned, the Field Marshal, chief of staff of the RRF, assigns the ranks and forms the chain of command. The Field Marshal, on the other hand, is appointed by the monarch and subordinate to the Ministry of War. Enlistees swear allegiance to the person of the monarch and the crown; the Tribune of Truth considers that the oath to the crown differs from an oath to the State, in that while the crown represents the State, both are distinct entities - for example, if the State became republican, the enlisted would be free to take military service, as his loyalty was to the crown.

The Crown is the exclusive retainer of power to summon the Reserve Force into action, although, according to the 6th constitutional ammendment the RRF can only be summoned in extraordinary cases of war or when the well-being of the state requires, as the country is barred from having a standing army in peaceful times. In most cases the Sovereign may summon the Reserve Force following its Prime Minister's advice or asking.

The Royal Cyber Corps, abbreviated as RCC, is the sole branch of the RRF (apart of the RRF proper), responsible for directing cyberspace operations and dealing with information warfare. It is a reorganization of the former Royal Ebenthali Cybernetics Corps, which was maintained after the abolition of the standing armed forces and integrated into the Royal Reserve Forces. Like the rest of the RRF, the RCC is a no standing force and is made up mainly of civilians who are called to active duty by the monarch as commander-in-chief. The command of the RCC is directly subordinated to the general command of the RRF and is appointed by the Field Marshal. Due to the micro-national nature of Ebenthal, the country is more susceptible to cyber than physical attacks and therefore RCC members are called into action much more frequently than regular RRF members.

The officers rankings are as below. Ebenthal maintain an old Lusophone tradition of calling the Aspirant ranking as Alferes, as the position was known in the former Kingdom of Portugal and Empire of Brazil. The Ebenthali rankings were mainly inspired by the military rankings of Brazil, while its insignias were inspired by those of Finland and the Independent State of Croatia.