The Earth's Kingdom, officially the Humanity and Earth's Kingdom, is a peaceful Micronation without any territorial claim, and is ideally located in the various areas of the world. The purpose of this micronation is to group all the civilizations and cultures scattered around the Earth into a single large family: that of Humanity.
The Earth's Kingdom is a Member State of the European Micronational Union with the aim of agreeing all the european micronations in order to establish eternal peace.

The Earth's Kingdom takes the name from its main purpose, which is to group all humanity into one nation.

The Earth's Kingdom was founded on 18 April 2020 by Antonio Di Martino, helped by a small group of friends to develop and organize it. Also on April 18, Antonio was named King of the Earth's Kingdom under the name of Antonio I.

Ideally, the Kingdom was founded in Campania, and, as citizens from various nationalities increase, it will expand over the various territories of origin of the population. For example, if an Italian citizen acquires citizenship of the Kingdom, it will expand on the territory of his origin.

Referendum on the flag and the Coat of Arms 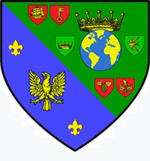 The Coat of Arms most voted in the Referendum

The flag winner of the referendum

Provisional publication of the Constitution

From the 19 April to 21 April 2020, Antonio I, Gianmarco Buomprisco, Gerardo Di Tore and Kemal Alfano got together to write the Constitution, which ended on 21 April afternoon. On the 21st evening it was approved by the Green and Blue Commission and published the following our.

Death of the Minister of Nobility

The Minister of Nobility who was in office (Riccardo Pastore) on 29 April 2020 passed away. This incident greatly affected Antonio I, who dedicated a square to him. Later the elections were held and the winner was Gianmarco Buomprisco, who was already the King's Adviser.

The national ideal expansion in 21 April 2020

On 21 April 2020 the ideal territories of the Earth's Kingdom in Campania were made official, but, as citizens from all over the world acquire citizenship, the Kingdom ideally expands throughout the World.

On 2 May 2020 the Kingdom expanded by connecting the exclave to it (the current County of Abria) following the strip of coast.

On 19 May 2020 the Kingdom annexed another piece of land (the current Duchy of Berignano) due to the sudden increase of Citizens (+6).

On 15 June 2020 the Kingdom annexed the County of Prano for the increase of citizens (+4).

Definitive publication of the Constitution

From the 28 May to 31 May 2020, Antonio I and Gianmarco Buomprisco definitely completed the Constitution, which was approved by the Green and Blue Commission and published the 1 June 2020. 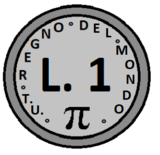 The economy of the Earth's Kingdom is managed by the Minister of Economy.
The economy is based almost exclusively on the offerings of the population (they are free to donate what they want) and the Royal offers that help the national economy. When a citizen donates to the state, he receives a Noble Title, which varies with respect to the amount donated.
The value of the coin varies according to the amount of donations and support from the King and the population. The Earth's Lire is the national currency, adopted on 19 April 2020. The official exchange rate is 1 E.Lire: 2 Euro.

Logo of the Administration of the Patrimony

The Earth's Kingdom has actual one State-owned enterprise, the Administration of the Patrimony of the Earth's Kingdom, provisionally managed (for lack of elected officials) by the King from birth to 31 December 2020, and currently managed by the Ministry of Economy and therefore by the current Minister of Economy Riccardo Buomprisco.

To see all Federation Member States go to Administrative Divisions of Earth's Kingdom.

Inside the Earth's Kingdom, all the languages are national .
English is the best known foreign language, and therefore it is mainly used as a language to speak to the population.

Earth's Kingdom currently count 56 citizens (July 2021).
The population of the Kingdom is composed by people that comes from different Countries.

page not yet completed

The Earth's Kingdom is a Member State of the European Micronational Union.
It has excellent relations with the Kingdom of Florensia, the Maritime Republic of The Damariscotta, the Presidential Republic of Pyrostan, the Federal Kingdom of Starasia, the Republic of Sheltered Coast, the United Republic of Polmonia, the Shahdom of Monsaltay, the North Battipaglia's Kingdom, the Union of Parthenopean States and the Kingdom of the Eastern World.

According to the Constitution, the state recognizes all the holidays celebrated by citizens, but also has some official ones, which are the following.