Formation of the Falangist State (2020)

On 10 April 2020, Grand Duke Mason took emergency powers in the nation. Under this state of emergency, the national Lutheran church was abolished, the MPD was dissolved and parliament was abolished. This was due to a factor of reasons, such as the changed political views of the Grand Duke, who grew to espouse Falangism, Austrofascism, agnosticism & the nationalist ideology of the 1920 Kapp Putsch and various other German Right Wing and Third Position groups. Finally, the title of Grand Duke was abolished, thus ending the Duschvarian Monarchy. This soon lead to the rise of the Duschvarian Reich.

Formation of the Double Entente 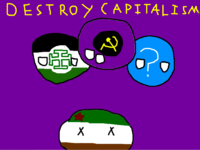 Holen Propaganda about the Pact of Nations made during the Turbo-Holen War.

Soon after on the same day, the Treaty of Sachsburg was signed. This formed a pact between the Duschvarian Reich, the Hole of Communism and the Alexandrian Empire. It gained its name after the two first members, the Reich and the Hole of Communism. It is a united front against Capitalism and will defend the others if they are attacked.

Two days later on 12 April the National Syndicalist Falangist Party was formed, becoming the only legal political party in the nation.