CIMS, officially The Coalition of International Micro-States, was a large inter-micronational organisation comprising of around fifty member states. CIMS was a non-political organisation, seeking to create unity, friendship and co-operation, without interfering in the politics of its member nations.

CIMS as an organisation may have only lasted two years, but in its short life time is has made a lot of history. From changing the organsiation of itself, to changing the way individual micronations interact and communicate.

In early 2011, a group of micronationalists met over Facebook to discuss the creation of a union between their nations. They were President Pace of Pacionia, Prime Minister Persson of Öokko and President Ryu and Emperor Park of Wyvern. The Union was to intended to be a union of friendship and mutual recognition and co-operation between the three nations. Little did any of the three founding members realise just how large and significant an organisation they had just created.

Soon after the foundation of UPOW, another member state was inaugurated into the union, The Principality of Inesia, represented by Prince Yogi I. With the addition of Inesia, the union became stronger and began to enter into discussions with other groups and nations, marking the path for further growth and development 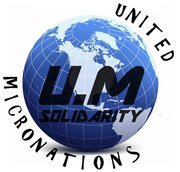 The UM Insignia, designed for The UM by H. Löwenberg

In July 2011, The Union was joined by The Communist People's Republics of Strathy and The Grand Duchy of Basehor, represented by People's Commissar James H Whittle and Grand Duke Nathan Lucas, respectively. With the addition of the two new member states, it became clear that the organisation was growing quicker then expected and thus a new name would be needed to describe the group. After some discussion, the name of The United Micronations or The UM, was chosen. Under this new name many new member states joined, such as Trystansburg, Padrhom, Caladonia and Podjistan. However, further change was yet to come.

In September 2011, The UM had grown to around twenty member states and it was decided that in order to keep all decision making and various responsibilities running as smoothly as possible, a General Secretary should be elected. Until this point, the role had been semi-assumed by President Ryu of Wyvern as he had been the founder of UPOW. President Ryu had taken it upon himself to organise meetings, to meet with other organisations and nations and to make the necessary decisions. However, there was little idea as to who was actually deemed to be in charge and what the responsibilities of that person really were.

In September 2011, Si Chan Ryu of Wyvern made the decision to elect a General Secretary, but insisted that he would stand down from his role and not stand for election. He said that he had done his bit in founding the organisation and it was time to let someone else take the reigns.

The first election saw a remarkable turn out of nearly all members. The result was that President Olof Persson of Öokko was elected as The Fist General Secretary of The United Micronations. After his election he chose People's Commissar James H Whittle of Strathy to take up the role of Vice-General Secretary.

The United Micronations to CIMS 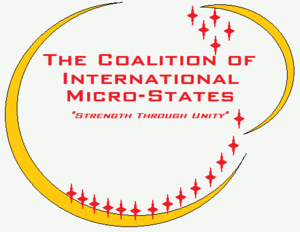 The CIMS Insignia, designed for CIMS by JH Whittle

During President Persson's reign as General Secretary, there was call for another change of name, this time from outside the organisation. A dispute arose when it was discovered that another organisation was already using the name 'The United Micronations'. General Secretary Persson made clear that any dispute such as this was to be resolved in as civilised a method as possible.

A brief investigation was launched to determine who had used the name first. Unsurprisingly is was the claimant organisation, thus General Secretary Persson along with Vice General Secretary Whittle decided that a name change was the fairest and best course of action to take. Whilst this initially met with some disagreement within The UM, most member states eventually agreed that the change was the best way forward.

The floor was opened for all members to put forward their ideas for a new name and logo for the organisation. In the end, the suggestion that was chosen was Vice General Secretary Whittle's idea of 'The Coalition of International Micro-States' or 'CIMS' for short. This has been the name ever since.

GS Syahputra and The Great Expansion

In February 2012, General Secretary Olof Persson came to the end of his six month term. He decided, as President Ryu did before him, that he should step down from the role allow a new member to bring a new flavour and a new set of ideas to the organisation. The result was the closest fought election to date, with four candidates standing.

In the end James H Whittle, former V/GS, and Yogi S Syahputra were tied and the vote went to a tie-breaker. The end result was Syahputra winning by only two votes, one of the closest margins in any CIMS vote. After the election, GS Syahputra chose Whittle to be his V/GS.

In the weeks and months that followed the election of GS Syahputra, the organisation's membership sky-rocketed going from just over twenty members to over eighty. Under the guidance of GS Syahputra, CIMS has fast become one of the biggest micronational organisations, but with a twist: CIMS does not interfere with its members' politics, rather is it a place for micronations to forge bonds and friendships of varying degrees of formality.

It has also become a place where new, young micronationalists can come to get guidance from older more experienced micronationalists. It has become not only an organisation, but a source of wisdom and friendship for those entering the micronational world.

In July 2012, The Right Honourable Mr. Trystan Cline of The Most Serene Republic of Trystansburg was elected in as General Secretary. However, the election - or rather lack there of - raised questions about the membership of CIMS and the activity of Micronations within the organisation. In September, after the formation of the CIMS Council, President of The Council, Mr. James Whittle, met with Mr. Cline to discuss matters of membership. It became quickly apparent that the situation was far worse than originally imagined.

The Great Expansion of the organisation, that had taken place under General Secretary Mr. Syahputra, turned out to be the product of many members being added to the group against their knowledge by another member of the group. Further meetings were held between GS Cline and PoC Whittle to discuss the matters, alongside Council Member for Europe, Mr O. Persson (who would later be appointed CIMS Secretary for Membership). Together, they drafted up an action plan to oversee the resolution of the membership crisis.

In the months that followed, various issues had been tackled and methods were put in place to encourage activity by members, however things still remained slow. In the latter of the meetings, G.S. Cline declared, with the support of the V/GS and PoS, emergency powers were to be devolved to the General Secretariat and to the Council. These powers also saw the suspension of elections until something could be done to resolve the situation.

The situation was worsened by a spate of resignations, including formed General Secretary Mr. Syahputra and reigning Vice-General Secretary Mr. Mamahit. Discussions between The GS and PoS increased and many suggestions were put forward, some even included the dissolution of the organisation or merger with another. However these were considered to be too severe and that all effort should be made to avoid such actions becoming necessary.

With this in mind, further meetings were scheduled and elections planned for March 2013 at the earliest.

In the March 2013 Elections for General Secretary of CIMS, an unusual result arose. In the first round of voting, a tie was announced between two candidates; the previous GS, Mr. Trystan Cline, and the three term V/GS, Mr. James H Whittle. Whilst this in itself was not altogether unheard of, the next development was; a tie between the two remaining candidates in the second round of voting. Turnout was reasonably high, so the odds of a third round being anymore conclusive were slim. With that in mind Mr. Cline and Mr. Whittle entered talks to resolve the matter. The result of the talks was that both members agreed to become Co-General Secretaries of CIMS.

This would mean that both would have to agree on any measures to be passed, however it was seen that that was the will of the people of CIMS.

By the beginning of June 2013, it was becoming apparent that even with the emergency measures and new General Secretariat in place, CIMS was doomed to collapse. Seeing the looming dangers, the delegations from Trystansurg, Strathy, Draega and Caladonia met to agree a new strategy. The outcome of the meeting was that the only possible route was dissolve CIMS and start anew. Over the next few weeks, the four members met on a number of occasions to discuss the details of the new organisation that was to succeed CIMS. In the middle of July, the Second Coalition was born as the organisation to succeed CIMS.

CIMS was a large organisation with micronations from all different corners of the globe. Whilst there are some 'hot spots' there are micronations joining every day from countries all over the world. The dominant area was Europe, with over a third of all CIMS member states coming from Europe. Asia was the second largest contributor with the Americas following closely.

The most important section of The CIMS System of Governance (hence shortened to CIMSSG) was the General Secretariat.

The General Secretariat comprised of two people, one elected, one chosen. At the top was The General Secretary (GS). The GS was elected once every six months in a CIMS wide election with all member states getting to vote. The job of The GS was to chair meetings of The CIMS Council, act as an ambassador to other organisations and to, in some cases, make decisions singularly.

The other member of The General Secretariat is The Vice-General Secretary (V/GS). The V/GS was chosen by The GS after his/her election to office. The V/GS had the same sorts of responsibilities as the GS and was also responsible for delivering the minutes and findings of meetings of the Council to the General Assembly.

The GS and V/GS could also hold the power of veto in some extreme cases. However it can be controversial and was never been used.

In accordance with Resolution I, the duties of The Council were as follows

Sometimes referred to as 'The Floor' the CIMS General Assembly was the collective term for all member states within CIMS. They had the strongest role to play in the decision making process as they are the voters on all refurenda to be passed.

Past General Secretaries and Their Vices

(J H Whittle took over as V/GS after the resignation of J. F. Mamahit in December 2012)

(Co-General Secretaries after an unprecedented tie in second round voting)

The first and only ever CIMS Council was made up of the following members:

President of The Council