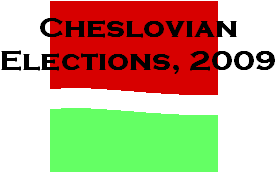 The logo for the Cheslovian Elections of 2009

The Cheslovian government elections take place 1 November 2009 and is the first election to occur in the Cheslovian Federation. Unlike other micronational elections, the Cheslovian elections allow citizens to elect a new President, Prime Minister and (if applicable) a new leading party at the same time. Of over 100 Cheslovian citizens, only 35 voted.

The Socialist Party of Stettin

Parties (or Independents) will have to write a policy, briefly setting out points of what they will do for the country.

Four days before the elections took place, Urosh Dushanov the then president and president nominee had withdrawn his application as president and gave it to Boris Groznayev. Urosh decided that he would be increasingly busy outside the micronational community and could not undertake a role which has much power and responsibility in Cheslovia. He will however do his part inside Cheslovia, however in a more quiet position, and he will be preoccupied with school work, college applications and his new part time job, at a supermarket.