Bregusland, officially the Bregusland Colony, was an Austenasian Crown Dependency comprised of a residential property bordering the American town of Gilbert, Arizona on all sides. The territory comprised a house, two gardens and one stone path that runs between the two. The house itself (referred to by locals as "Government House") served as the seat of local governance. Bregusland was formerly a city (known as Border City) of the then Kingdom of Rosston between 12 October 2007 and 1 February 2019, when it gained independence from Rosston (modern day Phokland) and shortly thereafter was ceded to Austenasia. It was dissolved at midnight on 1 January 2021, after its residents announced intentions of moving to another property.

The etymology of the name Bregusland comes from a loose translation of the welsh word Bregus, meaning vulnerable and the suffix land. The name was chosen to symbolize the territory's vulnerability to attack by its neighboring states and to show its dependency on the home empire. The name was chosen and subsequently adopted by the colony's provisional founding government in early 2019 shortly prior to Austenasian annexation.

The territory that would one day encompass Bregusland started out as a small administrative district of the then Kingdom of Rosston. The area was officially incorporated as a city within the kingdom in late 2007 following expansion into the region.

Upon being annexed, the territory began massive developments in the field of agriculture, with crops sold from the territory quickly adding up to over 20% of Rosston's total GDP. However, over time, a combination of poor crop yields and neglect from the central government led to Bregusland's economy entering a recession. This period would span over several years as little by little, important assets such as water irrigation and plant seeds began to be redirected to other parts of the nation. This only served to compound the problems within the territory and by early 2019, the local residents had had enough.

In January 2019, protests began in the area as residents demanded that work be done to the area to restore it to its post recession glory. However, these requests mostly fell upon deaf ears as the government of Rosston (now renamed to Phokland) had other issues to worry about. However, as demands continued to flood in, it was decided by the Phoklandian government that the best course of action would be to detach the land from the country. On 29 January 2019 the city therefore officially became an independent state and was declared the Free Territory of Bregusland. However, immediately following independence, it became obvious that the new nation did not have the means to sustain itself and so a committee was created to find a suitable micronation willing to annex the state.

Within 24 hours, the committee (headed by local leader and Phoklandian politician Charles Ross) decided that they would request annexation by the Empire of Austenasia both for the nation's stability and for the security brought by submission. The following day, talks began and on 14 March 2019 the state officially became an Austenasian Territory, adopting the name of Bregusland.[1]

Immediately following annexation, it was decided that Charles Ross would become the territory's first Governor and was subsequently granted the title of Duke of Occidentia.[2] Shortly after taking office, the new Governor pushed through massive reform and created several institutions such as the Imperial Bregusland Constabulary (IBC), Civil Council and Bregusland Trading Commission (BTC). In addition, trade deals were struck between the territory and the neighboring Phoklandian Free State to provide a steady stream of water to Bregusland and because of this, crop rates returned to pre-2007 highs.

Having recovered agriculturally, Bregusland increased its economic and cultural influence over its local regional area and due to its close proximity with other Kyberian Sector nations, held several lucrative trade deals with nearby states. In addition, the area also saw a boom in tourism with its most notable attraction, the Bregusland/Phoklandian Border becoming a relatively popular place for photographs among Phoklandian citizens. By January 2020 these advancements had gained the territory the local nickname of "Austenasia's Hong Kong". This association with British Hong Kong was encouraged by Ross, who in late January began to refer to the territory as the Colony of Bregusland and changed its flag to incorporate aspects reminiscent of Hong Kong's current flag.

Ross began to advertise online for other willing participants to aid in the governance of Bregusland, and increasingly pushed his view of the territory as "Austenasia's Hong Kong." Due to the increasing activity in the online community he had created and the autonomy required to implement the governmental and cultural changes he envisaged, as well as the desire of his parents residing in a neighbouring Phoklandian claim to join Austenasia, February 2020 saw Ross petition Emperor Jonathan I to have Bregusland transitioned into an Austenasian Crown Dependency. This took place with the passage of an Act of Parliament on 6 March 2020, which transitioned the Territory into a Crown Dependency, with Ross as Governing Commissioner, and annexed the neighbouring residence to give Bregusland three residents - Ross and his parents - for the first time. Since becoming a Crown Dependency, Bregusland has gained some fame after its response to the 2020 COVID-19 outbreak was publicised by Lonely Planet.[3]

In late 2020, it was brought to the attention of the government and the people of Bregusland that the territory encompassing the colony would be sold at the beginning of 2021 and that the Commissioner, Charles Ross would be leaving to join the United States Army. As such, talks began and by late November it was decided that on 31 December 2020, at 11:59 pm (Mountain Standard Time), Bregusland Colony would officially cease to exist as a territorial entity, although "Bregusland" would live on as an official designation for its population, who remained non-residential Austenasian subjects. This was officially confirmed on 15 December with the passage of the Bregusland Colony Act 2020. The territory of Bregusland was ceded to the United States, with a short ceremony marked by fireworks at the time of the cession in tribute to Bregusland's time as an independent land claim. 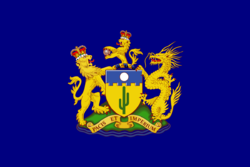 In mid 2021 former members of the old Bregusland Colony began loose discussion of a possible revitalization of Bregusland into a new state either as an independent nation or again as a Territory/Crown Dependency of Austenasia. Though a new flag was designed, as of yet no other serious work has gone into this effort aside from some brief speculative discussion with Austenasian Emperor Jonathan I and the universal agreement that the revitalized entity would bear the name “New Bregusland Colony” or just “New Bregusland” for short; though in the event this comes to fruition the simpler old name of just “Bregusland” would likely be used in day to day chatter.

Bregusland consisted of five Departments (often refered to as Districts), which made up the sub-divisions of the territory.

The culture of the territory was heavily influenced by both South-western American culture and the ceremonial and governmental traditions of British Hong Kong.

Bregusland actively attempted to encourage corporate immigration into the colony. This was accomplished by offering tax exemptions to companies based there and offering no international tariffs.

Several notable corporations either operated in, or were based in, Bregusland.

The government of Bregusland was locally administered by a legislative body, the Civil Council (Ci-Con) with the Commissioner serving as president.

The aforementioned Civil Council served as an advisory body to the Governing Commissioner made up of local residents and appointed liaisons who were tasked with proposing laws and regulations for the approval of the Commissioner. This council was headed by an individual known as the Chief Secretary.

The Chief Secretary was tasked with administrating the council and appointing under-secretaries to fill the many roles of government. Outside of legislation, the Chief Secretary was considered the "highest ranking civil servant in the territory" and as such they were responsible for heading public departments and choosing individuals to man the Civil Council (with the approval of the Commissioner).

The Secretaries of the Civil Council upon the dissolution of Bregusland were:

The Governing Commissioner (usually referred to as just Commissioner) represented the Monarch within Bregusland and as such legally held absolute power; under Lord Ross, this power was used to establish a Civil Council which he chaired as President. As the final say within the colony on all matters of law, the Commissioner was also the de facto head of the Bregusland High Court.