The Birthday Party of Whestcorea is a centre-right party in the Congress of the Federal Republic of Whestcorea. It was formerly the smallest party in Her Majesty The God Warrior's Most Loyal Opposition and was founded during the multi-partisan wave of October, 2015. Despite being a party of only one person, it miraculously survived both the tentative foundation stage and the November federal election, before finally losing its seat in the January election. While the Party Party was the governing party of the Congress during the BP's time in power, the Party Party and the Birthday Party have on occasion collaborated with each other on legislation, including for the Subsidised Birthday Soft Drink and Sugar Tax Act 2015, though due to the slow nature of Whestcorean bureaucracy, this bill remains in limbo.

The Birthday Party has only one member, and as such, only one leader: 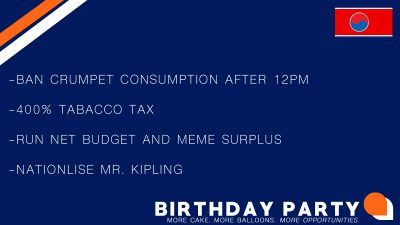 An advertisement outlying the party's polices.

The Birthday Party was a splinter party formed during the sudden exodus from the Party Party's ranks. It declared as it's key platform (as per its election poster below) "More cakes. More balloons. More opportunities." Indeed, it is the only party that requested the word "fun" be added to its MicroWiki official platform.

Following leaving the Party Party, AP OptiMegaCell (who already had a seat in Congress) used his seat to propose legislation such as the above mentioned Subsidised Birthday Soft Drinks et al Act. In the run-up to the federal election, the BP was the only party to use any sort of marketing to promote itself.

The Birthday Party achieved one vote at election, giving them one seat in the Congress. AP OptiMegaCell, who had survived re-election, made no comment.

Despite polls indicating a potential for an overwhelming majority for their party, the Birthday Party failed to win even one seat in the final election, being knocked out of Congress after three months of power.