Birddog is the debut album of Simon Reeve. Released on 8 March 2021 by the Aenopian record company 3 Rings Albums, the concept for the album had originated with the cancelled Trains which was intended to demonstrate that an album entirely written and produced by Reeve was possible. Birddog was recorded over a period of 2 months from January to March 2021, consisting of 7 songs. The album was released to YouTube however saw limited commercial success. Despite this, the single "Trains" would reach 84 views, making it the most popular song on the album.[2]

In 2019, Reeve began the production of his first album, Trains after being inspired by numerous bands such as Rush, Supertramp, Yes and King Crimson. Recording began in May 2019 with the epynomynous song Trains. Despite this, production of "Trains" was slow the album would later be cancelled following a plateau in interest and motivation with the only song under production at the time, "Trains" being saved - the name would be reused for Reeve's first single.

Reeve would later restart production on the album in February 2021 primarily as a result of national lockdowns across the United Kingdom and increased interest in producing an album.[3] Reeve would release the first single from "Birddog" to Youtube on 9 February 2021 to limited commercial success.

Because of boredom I decided to start creating an album and ["Trains"] is the first song, which I only just released a few days ago.

Sample of the single "Trains" released on 9 February 2021.

The album was recorded and compiled at New Aberdare from 2 February to 23 February 2021. Numerous sound effects, most notably the sounds on "Trains" and "Sandbox", were utilised in the album. The album was produced using Soundtrap, an online software allowing for users to create music or podcasts.[4] Birddog was recorded in sections, with shorter songs such as "Flight of the Mallard" and "Trains" being recorded before longer tracks such as "Ffrwd Dŵr". Some songs, such as "Raptors" and "Odyssey Part 1: Indulgence of the Senses", were produced almost entirely with pre-recorded instrument, which would become increasingly common during Reeve's later works. 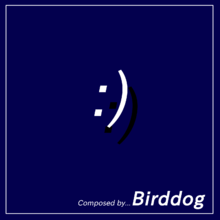 Original cover of the album "Birddog", later replaced by a different design.

The cover was designed by Reeve himself, depicting a British Rail Class 175 arriving at a railway station, with the original photograph credited to Reeve. The cover was primarily intended to serve as a reference to his first single and cancelled album Trains. The cover of the single Trains also serves as a reference to the original album, featuring a British Rail Class 220 at Leeds railway station in July 2019.[c]

Previous covers planned for "Birddog" featured an emoticon face on a dark blue background with a thin white border. The text 'Composed by... Birddog' is present in the bottom right corner.

All music is composed by Simon Reeve.

Birddog was released on 8 March 2021 and was initially published to YouTube. Despite initial popularity with the single "Trains", Birddog saw limited commercial success and would reach 58 views on YouTube as of 13 March 2021.