On 12 October, the Aswington government announced the call for general elections in the country. Although no specific date has been given, it was announced that they would be held in mid-December.

On 1 December, the date of the elections was announced. These would be held on 15 December.[1]

The President of the Republic is elected by first-past-the-post system. The candidate who gets the most votes wins the election.

Members of the National Assembly are elected with party-list proportional representation. Seats are allocated to political parties using the D'Hondt Method, based on the number of votes obtained by each political party. 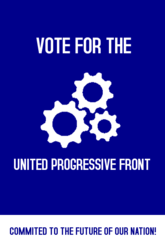 After launching separate candidacies, the Progressive Party and the New People's Party formed a joint list on 15 November. This list includes as head of the list Juan Cisneros and Noah Woodgeard. On the same day, the United Progressive Front coalition was formed to support Juan Cisneros candidacy for the Presidency of Republic. On 6 December, the coalition presented its electoral program, focused on diplomatic, social, cultural and environmental issues.[2] 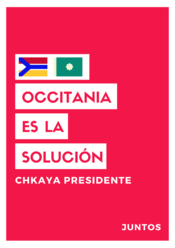 The Juntos coalition presented its list of candidates in November. As head of the list is Babou Chkaya, then Ivanna Minaïeva, María Fabré and Adélia Cerdan. In turn, the party presented Babou Chkaya as a presidential candidate. On 5 December, the coalition presented a electoral four-point program, called Six Months of Governance, aimed at rapid integration into Nova-Occitania.[3]

The National Electoral Commission announced the results in the early morning of December 16. In them, Juan Cisneros won the election for a new presidential term, while the Together Party party obtained an absolute majority in parliament. The United Progressive Front, a small coalition of pro-government parties, only won a seat.