Arnvid was educated at Malmö University and he graduated as a senior high school teacher in 2017.

After his introduction to micronational affairs Arnvid began doing protective work and became Keeper of Keys and later in 2015 Lord High Chamberlain. Still to this day, Arnvid holds the spare key to the Malmö Headquarters. As Lord High Chamberlain, Arnvid is entitled to use the Chamberlain Key and Rod which are the insignia of the office. The key on a teal ribbon is to be carried on the lower left side of the chest, while the rod is to be held in the Lord High Chamberlain's right hand and leaned against the right shoulder. 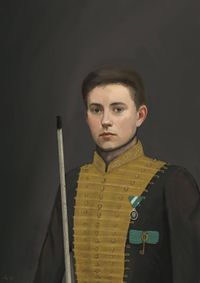 Portrait of Arnvid Andersson in uniform with the insignia of the Lord High Chamberlain.

In 2017 a physical abuse occurred in Trelleborg, the hometown of Arnvid.[1] The incident made headlines due to the fact that the weapon used was a chocolate bar. When Arnvid got hold of these news he immediately became deeply interested in the incident and the underlying factors to why a chocolate bar could be considered a proper weapon. This lead to intense studies on the local cultural life and also made an impact on the Archduchy as a whole. In 2018 the Archduchy fully adopted the chocolate bar as a viable weapon for the armed forces of Mimas. This was considered to be in line with the already established motto of the armed forces: "Make coffee not war".