Tudor Alessandro is a Romanian monarcho-centrist micronationalist that is the founder of the Principality of Luana, Principality of Siriu and of "Insula". He takes part in the Royal House of Tudor.

Around 2016, Alessandro and a couple of his friends established the "Insular Army", an imaginary army that was invented to "protect" their little neighbourhood, which was oftenly called Insula (the word Island in romanian, derived from the name of the street which made up most of the little neighbourhood "Aleea Insulei"). The "army" slowly evolved into a state-like structure, creating flags, coat of arms and more, what we would nowadays call a micronation, but he and his friends had no idea that they just invented a micronation. The insulars had held multiple little "wars" with a neighbouring group of kids. During this period of the Insular Era, two short patriotic insular "movies" were shot and posted to youtube, only one of them still exists today. The Insular era ends in 2019, when the Insular micronation had it's last moments, before the group of friends distanced themselves from eachother for various reasons and Insula was officially dissolved.

During the Insula era there were 4 main periods:

This is the start of what would become the official Insula. At one point a dispute formed over a land south of what we would call the Main Insula, that mostly comprised of a park that would be oftenly visited by insulars, before another group started showing up regularly and claimed it was theirs. This dispute boiled over in kind of a "war" between the two sides, in which the insulars would capture "The Park" when the other group was absent, proudly raising a red fabric that represented the flag of the First Regiment(The Second Regiment allegedly had a flag formed of a couple of leaves on a stick). The insulars even had a little skirmish with them at one point, where some punches and rocks were thrown.

The conflict ended in a white peace, the insulars never aknowledged the ownership of the other group (called Parcarists) over the park itself, but the two sides were in good terms for a while after and both groups visited the park without any issues.

In this period the first insular movie was shot and uploaded to youtube, while the movie contained lots of information about Insula in this period, unfortunately the movie is now missing and cannot be found anywhere as of today, as it has been deleted off youtube and the old computer of Alessandro which stored it was reset, loosing all data. The only proof of this movie existing is in the memory of insulars, who can depict some scenes that were in the movie.

Estimated reproduction of the first official flag of Insula, drawn on A4 paper and hanged outside the main base of the army;

The island and palm tree in the center (important Insular symbol) and the abbreviation INSL in the corners. There were probably other elements on the flag also, but there is no other proof of this flag existing other than the memory of the insulars who were present at that time. There was also another flag that was completely red but that was an unofficial one.

The claimed territory by insulars, the south territory of "Park" being the shaded area.

Starting with late 2017, the previous army expanded and there started to appear a state-like structure, with a leader, separate marshal for the army, official flags, coat of arms and much more. By early 2018, the state became an Absolute-Monarchy with Alessandro as it's king. Around the same time, the insulars finally made an official claim to the whole of Insula (including their lost territory down south), which started hostilities again and enraged the parcarists, who wanted to protect their ownership.

These actions resulted in another war which was more of a cold-war situation, with spies being sent by both sides, but physical confrontations also existed, with the insulars being more aggresive than before, while the parcarists didn't want conflict, but also wouldn't give up the land. The conflict didn't have an official end, but in time some of the parcarists moved to another park elsewhere, and the ones left didn't wany any conflicts, so without officially recognizing that the park was insular, they remained in friendly terms with the insulars, even playing football matches together in the park. On official maps, after the "war", the park was represented as annexed by the Kingdom of Insula.

This was an official end to any further hostilites towards the parcarists, who were lessening in numbers as the days passed.

As the state was now free from any conflicts, they focused on developing the mini nation and around July 2018 another patriotic movie, depicting the war that just ended, called "Pentru Insula", that is safely stored in the personal archives of Alessandro.

Recreation of the Coat of arms of Insula and the Flag of Insula used in the early Creation period. It consisted of a Romanian tricolour in the backround with the Insular coat of arms on it. The coat of arms had a motto in the upper part but it's not known completely if it was what's written in the reproduction above, it's the author's best guess.
There is also a photo showing proof of both the coat of arms and the flag but they aren't shown very clearly. 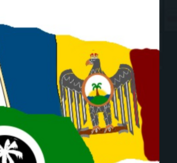 This flag was used in the late Creation period, when movie was made and when the insular authorities drifted to a more nationalistic approach, and the "Insular Movement" was created, that promoted aggresive ideals and exiling all parcarists from the southern territories, even complying ones.

Fortunately, this phase of nationalism didn't last long and the previously established nationalistic movement was disbanded.

The Reform Period was a rather short one, but in this period Alessandro first learnt of the concept of a micronation, which he shared with his friends, citizens of Insula. In this time period the Kingdom of Insula was affirmed, the little country took a more of a pacifist tone and drifted towards empowering the Monarchy.

The photo above is of the flag used during this period, using the national colours vertically, alongside with the new shortly-lived coat of arms which took more of a royal approach, but still having the island and the palm tree at the base of it.

In early 2019, Insula changed it's government to a Military Junta type of leadership, with Alessandro as the state's Marshal. In this period Insula laid claim on Centralia, a little land east of Insula, that the insular authorities had the hopes of establishing a protectorate in, though no military or diplomatic moves were made in this direction. 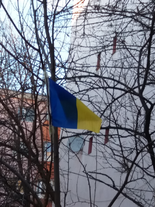 The Insular flag waving in the wind. 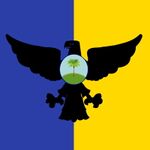 The flag of the Insular Military State and two posters from the period.

This was the the last era in which Insula existed, because in the summer of 2019, the group of friends that made up Insula slowly drifted away, each with their own problems.

The flag of that was flown in the main base from late 2018 until the last days of Insula was buried cermonially around 2020 in the garden of the base, the exact location of the burial isn't known. (It's the one from the photo on the right).

This was the first "real" micronation of Alessandro and with was made with the help of 3 former members of Insula. During the short time it existed Alessandro had learnt a lot about micronationalism and Transila had made a lot of achievements. 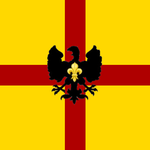 Recreation of the Transilan Flag. There is not much proof of the existance of this micronation, as it was lost.

Abristan was unofficially founded on the 28th of August 2019 with Alessandro as its' king.

It started with 2 citizens (Alessandro and one former member of Transila) and ended up with around 6. This period lasted until around the end of 2020.This is the predecesor to the main micronation of Luana, founded simply out of boredom, but as we will see later, will turn out to become a full fledged micronation with it's own history and ideals.

The former Insular territories were incorporated into Abristan, as it became a sort of little empire, with many territories spanning around the city of Buzau.

This is when the authorities of Abristan took the former mission of the insulars and started forming a plan to overtake Centralia and establish a protectorate.

A state broadcast channel was established in this era and it had a news bulletin that was live once a week, presenting the news of the week.

Abristan changed around late 2020, as it took the name and legends of Luana, finally having a worthy reason of being independent. (Old Kingdom of Luana)

The new Luana managed to sign a pact with some centralian figures and established a protectorate without aggressions, but later the luanian authorities faced some centralian rebels who kept destroying the military base in the now luanian lands of Insula, including one time stealing the flag of Luana that was flown in the base. With the help of parcarist volunteers and the 1st Infantry Platoon "Carol I", stationed in the heart of Insula, the flag was retrieved and later the rebels were crushed in a swift military operation.
In february of 2021 there was a short period in which Luana was apart of the new Luanian Royal Administration, the LRA being dissolved in late february.
On the 21st of February, the new Kingdom of Luana declared independence and undertook a lot of reforms that made the state even more powerful and organised.

The news bulletin continued to air, but now on more rare occasions, and eventually in

In the meantime, the Kingdom of Luana changed it's title to a Principality, and more reforms were made, to accomodate the loss of some citizens.

On the 16th of May 2021, the Principality of Luana was dissolved officially because loss of members and motivation, putting an end to an era.

On the 19th of September 2021 the Principality of Siriu was established. As the zone of Siriu was being mistreated by the incompetent and corrupt romanian government, the Siriu Principality took it into their hands to protect the zone from pollution, destruction of nature and the place's heritage, and also to maintain the population of the zone stable, respectively to stop it's decline.