Administrative Divisions of the Four Kingdoms of Millania

Millania's Administrative divisions are notable for its extremely complicated system of classification, each separate constituent realm also having its own distinct system. 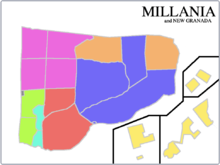 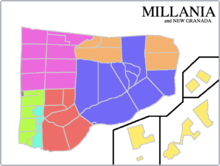 As afforded by the Nakjatsa, the primary top-level administrative division, under a unitary state, is the prefecture. There are currently eighteen prefectures under four distinct classes:

High Departments and Departments are the other top level under the unitary state, however do not have a population. There are currently none of these subdivisions, however, there used to be eleven.

Millania's Territories are plots of land which are not in the mainland of Millania or do not fit within the sphere of influence of the Oriental Prefectures. Crown Dependencies, Dominions, Overseas Collectivities, and Overseas Territories all have varying degrees of autonomy under the Crown, which is unspecified in the Constitution, however, it is noted that Crown Dependencies are the closest in autonomy to a prefecture. Crown Colonies are ruled by the Emperor directly.

Millania separates its second-level administrative divisions into municipalities, which can be grouped into five classes:

The only existing bottom-level administrative divisions in Millania are the wards of Pasabrillo, of which there are three.

Millania is traditionally divided into four integrated regions, (plus Andea, a group of territories in Antioquia and Risaralda, and Isla Larga, a group of divisions in New York), and five overseas regions. These regions are not official administrative units, but are used for regional division in a number of contexts. For instance, maps divide Millania into the eight (or nine) regions, weather reports usually give the weather by mass, and some businesses and institutions use their home region as part of their name.

Andea is often regarded as its own ninth region, due to the territories having close proximity to the mainland, and having similar geographic and cultural traits. Millanian Rattanakosin and Tsizau are usually grouped with Victoria.