From MicroWiki, the micronational encyclopædia
(Redirected from 2022 Gaplan Presidential Election)
Jump to navigation Jump to search

Statistics in the infobox to the right show the results for the first-place votes. Percentage values are only approximate.

The two main notable candidates who were most likely to win was Chelsea Chen and Emma Bunnell. The election resulted in an STV tie between the two and Chelsea Chen won the random tiebreaker, becoming the 2nd President of the Federated States of Gapla.

The following is a collection of events, history, and information about the 2022 Gaplan Presidential Election.

In addition, the election was contested a few times by the Free Rightist Party, and there was an attempt to impeach Chelsea, however, these attempts all failed. An extreme majority of citizens in a foreign country, the United States of the Terra Excelsior Republic, strongly supported the PNSP candidates, especially Chelsea. Many of their citizens cast invalid and uncounted ballots for Chen. This resulted in a greater skepticism of Excelsior inside Gapla.

The 2022 Gaplan Presidential Election had five candidates, which is typical.

The election is conducted through STV, and the terms are 6 months for the Assistants, and 1 year for everyone else, unless the President wishes to change their appointments at the exact middle of their term. 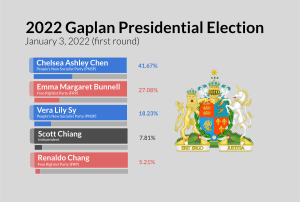 During the first round, Renaldo Chang (FRP) was eliminated as he had the least votes. Most of his votes went to Emma, but some went to Chelsea due to center to center-right bi-partisan voters. In the second round, the independent candidate Scott Chiang was eliminated. During the third round, Vera Sy (PNSP) was eliminated.

During the fourth round, an STV tie between Chelsea and Emma occured because they had the same amount of votes after elimination. Chelsea won the randomizer and was declared President of the Federated States of Gapla.

The following shows the tickets that the two major parties, the Free Rightist Party, and the People's New Socialist Party submitted. The third party that was eligible to enter a ticket (the Centrist Radicals' Party) did not do so.

An individual that met the requirements submitted his own ticket and defeated one main-party (FRP, Renaldo Chang) candidate.