The 2021 New Ulster general election was held on August 30, 2021 to elect the members of the House of Assembly to the 1st Parliament of New Ulster. The election was called by Governor Geoffrey Marsden on August 17 after Premier Ethan McAllister, who had been acting in a caretaker capacity since the founding of New Ulster on August 1, requested a dissolution of parliament.

The otherwise "quiet campaign" was notable for the birth of party politics in New Ulster with the founding of the centrist Democratic Party and the centre-right Liberal Conservative Party occurring within days of one another.

McAllister's Liberal Conservative Party won the most votes and seats but fell short of a majority, winning 3 of the 7 seats in the House. Despite this, McAllister announced he intended to remain as premier and form a minority government. The McAllister ministry was appointed by the Governor on September 1.

New Ulster was established on August 1, 2021 by the Constitution Act. Following the Westminster system, the Act states that the Governor appoints as Premier the person he or she thinks can command the confidence of the House of Assembly. However, as no House of Assembly had been elected at the time of its enactment, Governor Marsden was unable to appoint a government on this basis. As such, Marsden—citing the Confederation of Canada as precedent—opted to appoint a caretaker government that would serve until the first House could be elected and the first formal government appointed thereafter.

Marsden commissioned Ethan McAllister as caretaker premier on August 2. Despite being named a "caretaker government" the need quickly establish administrative processes and make important appointments meant that it was far more proactive in legislating than a caretaker government would ordinarily be expected to be. McAllister's first act as premier was to formally nominate Marsden as Governor. Being an unrecognized overseas territory of the United Kingdom, it was unlikely London would respond to the request to appoint Marsden Governor of New Ulster. To counter this, the Constitution Act contains a "no contest" clause which specifically states that any nomination requiring the British government's approval becomes valid if "no objection or alternative proposal" is received within 10 working days. Nominated on August 2, under this clause, Marsden's appointment became official on August 16, 2021.

The following day, McAllister—in-keeping with the Governor's mandate to serve as caretaker premier until the first House could be elected—formally requested a dissolution of parliament on August 17 and the calling of a general election for August 30. The move surprised many who thought McAllister would wait until spring 2022 before calling the election. However, speaking about the decision later, McAllister said he "honoured the terms of [his] appointment" as premier in serving "only until the House could be elected".

The Constitution Act does not specify a particular method of electing the House of Assembly; rather it stipulates only that each county of New Ulster elects a number of MPs proportional to its share of the country's total population.

Currently, as per an Order-in-Council issued on August 17, the House of Assembly is elected by the plurality-at-large voting method. Each county was allocated a number of MPs based on its population as per the Constitution Act with voters then given the same number of votes as there are members to elect. For example, Candlewood elects 2 MPs so voters there may cast up to 2 votes.

The counties and the number of MPs at this election were:

With dissolution on August 17 and election day on August 30, the campaign period would be the constitutional minimum of 14 days (including August 17 as the first day). McAllister, who as premier has the discretion to name the date of the election, was criticized by some for the snap election and the overly short campaign. However, he defended his decision stating that New Ulster being non-partisan and in its infancy, there was no need for a "pointlessly prolonged" campaign.

The campaign quickly gravitated around Premier McAllister and Leader of the Opposition Stephen Cameron. While the two largely agreed on most issues, the two notably disagreed on foreign policy: McAllister and his foreign minister Joshua De Koning favoured a selective approach to diplomatic relations (since dubbed the "McAllister—De Koning Doctrine"); Cameron favoured a more open approach, especially to other micronations.

When founding New Ulster, McAllister maintains he and Cameron made a gentlemen's agreement to keep its politics non-partisan. However, Cameron contests that while he made the agreement, he believes it was only for the duration of the caretaker government. As a result of his belief, once the election had been called, Cameron felt he had no requirement to be bound by the agreement. Therefore, on August 19—2 days after the election had been called—Cameron and fellow MP Eloise Penner announced the formation of the New Ulster Democratic Party. Cameron described the NUDP as "centrist and sensible" but was criticized at its launch for having no policy details beyond electoral reform; a point he acknowledged and agreed with following his party's disappointing election result.

The founding of the NUDP was followed by McAllister launching the Liberal Conservative Party five days later on August 24. When accused of "playing catch-up" with or copycatting the NUDP, McAllister countered that Cameron had launched the Democratic Party early to head off McAllister launching the LibCons which is why they appeared to have few policy initiatives. Cameron denied the allegation and pointed out the contradiction with McAllister's own earlier statements that he intended to remain non-partisan. Despite all this, McAllister and the LibCons were praised for having a complete party platform in comparison to Cameron's Democratic Party.

Some independent candidates condemned both men for founding political parties. In particular, Autumn Hunter—who would go on to join Cameron's Democratic Party—described the establishment of the two parties as a "double jeopardy" for New Ulster. Independent candidate Clara Hennigan, contesting the Quispamsis riding, said political parties would make it "impossible" for independents to win seats. She went on to one of three MPs elected for that riding; one of the other two also being aforementioned independent Hunter. 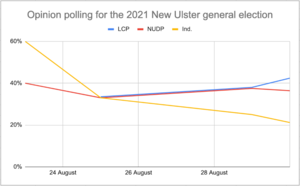 Graphic summary of polls in the 2021 election.

In the 14-day campaign, only 3 opinion polls were conducted and one of these was taken before the founding of the Liberal Conservative Party. Consequently, the LibCons only appear in two polls and prior to this poll their prospective MPs counted as independent candidates.

The official results were announced on August 31. The Liberal Conservatives became the largest single party in terms of seats and votes, but fell short of an overall majority. The LibCons won 3 seats and 42.4% of the vote while the Democratic Party won 2 seats and 36.4% of vote. Two independents were elected with independent candidates as a whole receiving 21.2% of the vote.

The hung parliament surprised some observers who thought the advent of partisan politics might lead to a lack of independent MPs. As it happens, however, both MPs elected as independents did not remain so.

Cameron conceded the election on the morning of August 31 and called McAllister to congratulate him. In turn, McAllister announced later that morning that he intended to remain in office as premier citing "parliamentary math": as the Speaker of the House does not vote save to break a tie, the LibCons' 3 seats were enough to deadlock a motion of no confidence and, by tradition in countries using the Westminster system, the Speaker traditionally votes to preserve the status quo; i.e. the Speaker would vote against a motion of no confidence.

McAllister met Governor Marsden on September 1 when he and his Cabinet—the McAllister ministry—were appointed.

On October 17, Speaker Hunter announced she was crossing the floor (i.e. changing parties) to join Cameron's Democratic Party. The McAllister ministry was scathing about this and demanded the Speaker resign. Being a minority government, however, the LibCons were unable to pass a motion to remove the Speaker. Hunter's defection was followed four weeks later on November 15 by independent MP Clara Hennigan also crossing the floor to join the NUDP; hence the sobriquet "the floor crossing controversy". Hennigan's joining the Democratic Party gave the party 4 of the 7 seats in the House and, therefore, a majority.

With no majority and exposed to a motion of no confidence from what he called "an actively partisan Speaker", McAllister stated on November 15 that it would be "difficult" to remain premier. On the morning of November 16, McAllister spoke with Leader of the Opposition Cameron, who reassured the premier he did not coordinate the floor crossings. Both men agreed that they did not want to fight a second general election in just 4 months. As a result, McAllister agreed to "give way" to Cameron without an intervening general election, which was his prerogative as premier.

On the evening of November 16, McAllister met with Governor Marsden and formally resigned as premier. Cameron met with, and was appointed premier by, the Governor just under an hour later.