The March 2021 Anthean general election was the first election to the Parliament of the Glorious Anthean Republic.

On 1 February 2021, the Glorious Anthean Republic was officially declared. In both the declaration and the First Provisions, a provisional election to establish a constitution were planned.[1][2][3]

Shortly following the declaration, there was significant disruption on the Anthea Planning Discord server which served as a major factor in the provisional elections being cancelled by David Easterling, who following the confusion de facto took the reins of the project from founder Ives Blackwood.

In a new server, plans were made to continue the 5 March elections as normal. Established in the First Provisions, a Boundaries Commission managed by David Easterling was established to create and manage constituencies based on existing micronational divisions and communities, align with the goal of a community micronation.[2][4] Despite the commission initially providing provision for several constituencies,[4] the Czech MicroWiki constituency and several borough constituencies for communities such as TOES were eventually dropped. The only remaining constituencies were those representing MicroWiki, Fesmar and The Fun Gang, with only the latter two filling their seats.

All parties contending in the general election were newly formed, given the formation of the national merely a month prior to the election.

The Conservative-National Party fielded the most candidates, running for seats in both the MicroWiki and Fesmar constituencies. The Social Democratic Party fielded the second most candidates, though they campaigned solely for the MicroWiki seats in Parliament. Several minor parties, namely the Labour Party, Czech Party and the Liberal Democrats all ran for seats in the aforementioned constituency. The Anthea United Party ran solely for one of The Fun Gang seats. The election was unusual in that most of the candidates served as independents, running for seats in ever single constituency.

The Raditrans party were originally to field 3 candidates, after the merger of the Social-Democrats into the group.[5] Following a scandal regarding the parties leader Beti de Quadrie, the Social-Democrats split from the party, and the ballot nomination for Beti was withdrawn.

The following candidates withdrew from campaigning or had support from their party withdrawn after the close of nominations. None of these candidates were elected.

At the beginning of the electoral period, Raditrans and the Conservative-National Party were the two largest parties, seconded only the Social Democratic Party.

The Social Democrats briefly merged under the Raditrans movement and platform, though the parties had split by the time of the election. The main reason for this defection was the scandal revolving around party leader Beti de Quadrie. Following a spate of incidents on MicroWiki@Discord, it was discovered that Beti was a sockpuppet of founder Ives Blackwood, which contributed to their removal as a MicroWiki@Discord moderator and MicroWiki administrator. Even before the scandal, the Raditrans party was the subject of international controversy, following an incident involving the head administrator of MicroWiki@Discord– resulting in the party leader being banned from the discord servers of Anthea, Austenasia, and suffering repercussions in the Unified Royal States of Australis.[6]

The collapse of the Raditrans party left a power vacuum, which contributed to the return of the Social Democrats, and the later electoral result yielding no overall control in Parliament.

Campaign poster used by Raditrans during the election

The Social Democratic Party campaigned for full equality and democracy within Anthea.[5] Whilst the Conservative-National Party had no official policy on civil rights, party member Corinth Newton stated that they support equality. The Liberal Democratic Party believed in indivisual freedom so long as it was used in a "socially responsible way".

The Conservative-National Party and the Liberal Democratic Party advocated for right-wing politics. 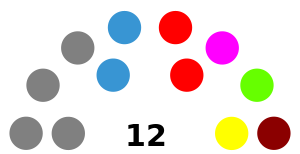 A summarised results of the parties that won seats at the election is as follows:

In the wake of the election, de facto leader David Easterling resigned as head moderator of the Anthea server, handing control over to Sertor Valentinus.

Screenshot from the Anthea discord server of Easterling's resignation.

With the lack of overall control in the house, three days were granted for the Political parties in Anthea to form a coalition in order to establish a majority to break the hung parliament.

Despite the Conservative-Nationals, Czechs, Liberal Democrats and an Independent politician seemingly near-formalising a coalition, negotiations eventually fell through by the time of the deadline

A vote was called amongst the sitting members on how to proceed, with the resulting overwhelming consensus dictating that the house open despite the lack of any overall control.