From MicroWiki, the micronational encyclopædia
(Redirected from 2020 Efrasachin General Election)
Jump to navigation Jump to search

The 2020 Efrasachin General Election, formerly the October 2020 General Election was the first quarterly general election in Efransa, which was held on 11 October 2020, which is also the national day of Efransa. The election will consist of the first official Presidential election and the second official parliamentary election, along with various elections to national councils, committees, and commissions, as well as various local elections.

In the parliamentary elections, all seven National Assembly seats are up for election, and no Senators as none were challenged into retention elections. The Countess of Machy and Viscount Chatham are seat for easy re-election in Efrasaduro, as are the Lord of Guane and the Lord of Fencia in Pormalia.

Desozziyu is set to be the tightest race this election. King Ethan is running in DU-1 currently un-opposed as an independent. DU-2 has no candidates, as is the same with the at-large constituency. Projections see (assuming the SDP and League put candidates into the two races with none) a 5 seat majority for the SDP, with one League Representative (Guane) and one Independent (King Ethan).

Assuming an SDP victory, which is all but guaranteed, The Countess of Machy is set to stay in office, along with the rest of her Cabinet. The King has pledged to abstain if elected to a seat. 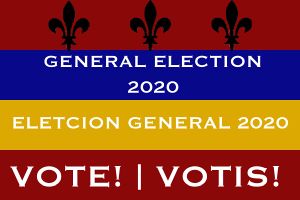 Logo of the Elections

King Ethan shockingly announced his candidacy for a full term on 14 August, challenged briefly (for about four hours) by Viscount Chatham, who withdrew stating he “only ran to annoy the King”. An ant from Parsrid named Elena Thorax (likely a puppet of Chatham) announced her candidacy as a write-in.

King Ethan is set for victory against Ms. Thorax.

The election for People's Defender will take place on the same day as the presidential and parliamentary elections. No candidates have been declared, and the King has not reached a pubic decision on an appointment if it is not filled by-election. The position is also currently vacant.

Board, Commission, and Council Elections

The people will also go to the polls to elect one Member of various national Boards, Councils, and Commissions.

One member of the Board of Economic Directors, the economic regulatory authority, will be elected, along with the Public Supervisor on the Board of Business Supervisors.