From MicroWiki, the micronational encyclopædia
Jump to navigation Jump to search
For a timeline, see 2017.

Logo of the 24 Hour Quorum, which had over 30 participants and "united much of the community in a single event"

The year began amidst the Polarised Era, during the period dubbed "Return of the GUM", into the Stagnant Era, through Early Stagnant (4 May) to High Stagnant (5 September), and oversaw a number of significant events.[1] 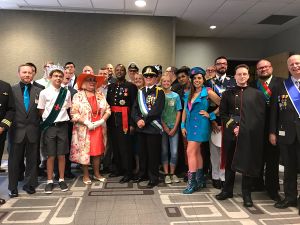 Attendees at MicroCon 2017, some of whom were from the MicroWiki community

Tensions between the left- and right-wing and between the older and newer members of the community continued to die down early in the year,[1] but these causes were briefly revived in August 2017 by two intertwined controversies, the New Community and a diplomatic dispute between Austenasia and Delvera.[2][a] The Grand Unified Micronational hosted a second 24 Hour Quorum between 6–7 May, and Quorum was successfully maintained for 24 hours. It had over 30 participants, and was considered highly successful, with statements saying "it united much of the community in a single event".[1] MicroCon 2017 was hosted between 22–25 June, and attended by 25 micronations from three continents.[6] It included a conference, formal banquet and a series of presentations from numerous micronationalists. The event had notable media coverage.[7][8]

According to the History of the MicroWiki community article, the "community leaders" were site owner Jonathan I, Emperor of Austenasia, Adam I of Überstadt, Anthony Clark, Henry Clémens, Brooklyn Hewitt, and Stephen I & II.[1]

According to the Sixteenth MicroWiki Influence Survey, which took place on 30 April, the top scoring micronations, excluding Molossia and Sealand, were Mcarthia (with 11 points), Austenasia (10), Abelden, Esse (both 9), Paravia (6), Lundenwic (5), and Koss, Thegn-Hold of Siar Fordell, Überstadt and Zenrax (all 4). It was the first time since the Twelfth Survey where Austenasia was not ranked number one.[9] The survey did, however, receive noted amounts of criticism.[citation needed] 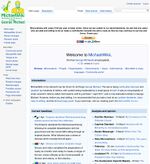 Jonathan I of Austenasia remained the site owner for a third year; for April Fools'–an annual tradition on MicroWiki–MicroWiki became MichaelWiki, "The internet's top fan forum for all things George Michael".

MicroWiki grew to 11,000 articles, 56,000 pages, and hit 2,300 registered users. Jonathan I, Emperor of Austenasia remained the site owner of MicroWiki for his third year. User:Jacob (Eren) Lewis (Elizabeth Lewis) was appointed as a wiki admin in March, replacing User:SiroccanGov (Daniel Anderson), and User:Twain (Henry Clément) was appointed in September. Wiki admins who continued serving were User:JosephKennedy2 (Brooklyn Hewitt) for his third year and User:Überstadt (Adam I of Überstadt), User:Cip (Ciprian of Juclandia) for their second years, and tech admins User:Sebastian Linden (Sebastian Linden) for his fourth year and User:Luxor (Karl Friedrich) for his second year. User:Nedland (Ned Gunderson) claimed the title of the highest edit count on 10 June upon reaching 13,041 edits. He held this distinction until 15 April 2019. For April Fools'–an annual tradition on MicroWiki–MicroWiki became MichaelWiki, "The internet's top fan forum for all things George Michael", after webmaster Jonathan I the previous day announced that he was selling the wiki to a mysterious new owner. The music video of George Michael's 1984 single Careless Whisper played on the front page, the wiki's typeface was changed from Arial to a handwriting style, and the logo was replaced with one for "MichaelWiki".

Three episodes of ATP's Cool Barbie were released in 2017, the most of any year excluding the three "Minisodes" in 2015, those being "A Last Chance" on 10 August, "The Assassin" on 30 August, and "The Invasion of the Eagle" on 10 September. The Diarchy, an indie rock group between Newton von Uberquie and Henry Clément, was formed in 2017. "Paper Tiger" was the group's debut single. Admin approved publications to the MicroWiki headlines on the main page in 2017 include Abeldane Telegraph, Ashukovski Vesti, IADP News, Koningswyk Gazette and Messenger.