Difference between revisions of "Travis I, Grand Duke of Westarctica"

The Grand Duke has been involved with various micronations, and has founded three of his own, starting in 1996 with the Kingdom of Casbah, then Westarctica in 2001, and finally Calsahara in 2009. In between these projects, he served as a governor for two provinces of Molossia.

Travis McHenry began life as a humble boy in 1980, but his life would not remain humble for long. When his great-grandfather died, the one-year-old infant inherited the title Baron of Dunluce Castle, stemming from his family’s ancestral lands in Northern Ireland and the various domains controlled by the O’Neil Clan during the early 1600s.

His first real position of leadership came in 1995 when he founded the break-away Kingdom of Casbah in rural Pennsylvania. Travis was proclaimed Maharaja, and ruled the agrarian nation with an iron fist. As a result of his various eccentricities and demanding temperament, he was overthrown twice, with the second usurpation resulting in his exile and the collapse of Casbah’s government in October 2000. The events of his reign in Casbah were later satirized in the stage play Delusions of Grandeur.

In late 2001, he discovered a loop hole in the Antarctic Treaty which legally allowed him to claim a huge swath of land on the Antarctic continent for himself. This area was initially called The Achaean Territory, but became a fully functioning nation named Westarctica in 2004.

Travis took the title Grand Duke and ruled Westarctica as a peaceful and progressive monarch. During this time, he made many diplomatic friendships with other international leaders and did much to advance the recognition of Westarctica among member-governments of the United Nations. Grand Duke Travis ruled Westarctica until 2006 when he turned over the reigns of government to his successor Grand Duke Philip.

On 3 June 2010, Travis reclaimed the throne of Westarctica from Grand Duke Jon-Lawrence and promptly proclaimed Westarctica a protectorate. He would return to a reestablished throne as Grand Duke Travis in 2012.

Immediately following his abdication of the Westarctican throne, Travis was approached by President Baugh of Molossia and offered a position as Grand Admiral of the Molossian Navy. He graciously accepted the ceremonial military post and shortly thereafter was appointed to the post of Governor of New Antrim, a ten-acre Molossian protectorate in Pennsylvania. 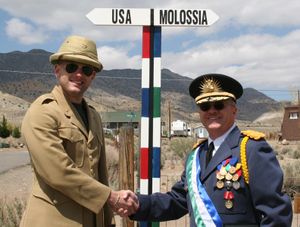 During his service with Molossia, Grand Admiral Travis fought in the War with Mustachistan, which lasted for two months in 2006. The Grand Admiral served with distinction on the Eastern Front by leading the Molossian Navy to victory in the Battle of Lake Jean, a feat for which he was awarded the Mustachistan War Medal. As Governor he successfully mediated the New Antrim Tobacco Crisis in 2007. Travis served as Governor of New Antrim from 2006 until the dissolution of New Antrim in late 2008.

Not one to go unemployed for long, in early 2009, President Baugh asked Travis to continue his service to Molossia by becoming the Governor-General of Desert Homestead, a Molossian province in southern California. While the hot, desolate province was a dramatic change from the green forests and flowing rivers of New Antrim, Travis accepted the post and began his tenure as Governor-General. His accomplishments included the clearing of rubbish from Desert Homestead, and the construction of Baugh Terrace, a monument to the Baugh family. 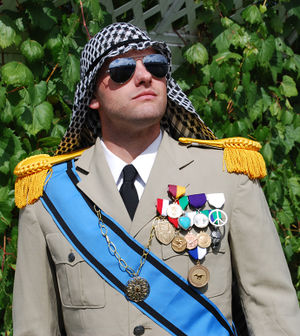 Travis acquired 2.5 acres of barren land in the California Valley and founded the nation of Calsahara in November 2009, proclaiming himself king of the new country. In an unusual move, Travis decided to adopt a regnal name, and chose the name Montague. Since ascending the throne, King Montague has developed Calsahara into a thriving micronation with a rich, diverse culture.

King Montague is a professional actor, frequently appearing on stage, film, and television. In addition to acting, he has written many books including Tales of Terror, Delusions of Grandeur, The Warrior Poet, and his best-selling book, Into the Abyss: The Memoirs of a Paranormal Adventurer.

He resides in southern California.

Grand Duke Travis has received numerous awards, knighthoods, and honorary military appointments as a result of his diplomatic outreach and cooperation with foreign nations.

Honors of Westarctica and its Territories