From MicroWiki, the micronational encyclopædia
This is an old revision of this page, as edited by Isaiah David (talk | contribs) at 05:24, 28 December 2020. It may differ significantly from the current revision.
(diff) ← Older revision | Latest revision (diff) | Newer revision → (diff)
Jump to navigation Jump to search

SkyMarshal is the term used to describe the military/political position of absolute leader within the nation of Valnorgrad. 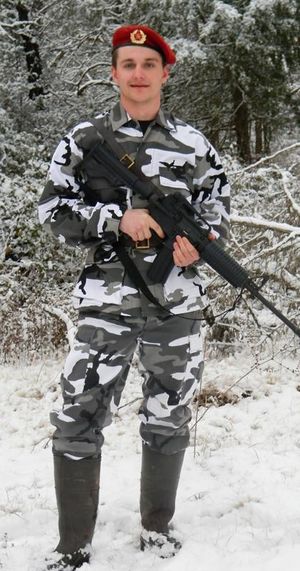 In the nation of Valnorgrad the SkyMarhal has absolute power over the government activities. Under this new leadership the nation can now run more effectively. This position is not taken lightly nor is it taken with power hungry hands. Although the SkyMarshal has absolute power, the leader of the nation listens to the advice of the Legion Commanders. The Legion Commanders are not only the military leaders but the direct reps for the people, so there advice is highly valued. The SkyMarshal has also passed a new law on his own accord, making it impossible for him to declare war without a 100% vote from the Legion Commanders. This position comes out of the need for decisiveness and quick response in the government.

A history of Military rule

When the nation was first established in 2006, after short while it was apparent that due to the sheer size of the new Confederacy that a military rule would be necessary to maintain law and order. The Confederacy set up a military council that would prioritize needs of the nation and allocate budgets accordingly. Under this type of rule the government was run neatly and effectively with waste being cut down to a minimum. The first council put into place the first laws and regulations that not only told people what they could and couldn't do, but also protected individual rights.

During the declining years of the Peoples Republic many citizens that called for democracy was missing the order the military way of government offered. After the aristocracy "sold out" the Bennington colony after the polls showed that 95% of citizens did not support the selling of the colony, it was decided by the Legion Commanders to retake the government and install one of the founding family members to a new position.

Unlike the Republic witch suffered from a lack of decision making, the new leadership was formed for the sole reason that once voice could move the entire nation.(i.e under the Republic the elected council could approve military action, then the treasury council would have to vote on funding for the operation) after all this in many situations it would be to late.

So the SkyMarshal was appointed to replace the elected council with a single voice and under the Re-glorification Act, the treasury council was disbanded and given power to the SkyMarshal. The act of re-militarism,re-glorification, along with others now our entire nation to move in one harmonious voice to achieve our goals.