The Order of Sawatch was an order of chivalry within the Empire of Agber and the former Sawatch Emirate. The intention of the Order was to honor those who provided a service to the Emirate. It was created on 31 January 2014 as the first and highest order of the newly established Sawatch. It was replaced as the nation's highest honor on 22 June 2020, and then dissolved with the Emirate on 28 September of that same year.

There were three classes of the Order, each with their own unique regalia:

The last Sovereign and font of honor for the order was Emir Isaac, as then reigning monarch of Sawatch. While his rank of Knight Grand Star officially was equal in precedence with others who held that rank, his status as Member Ex-Officio gave him functional precedence within the order. 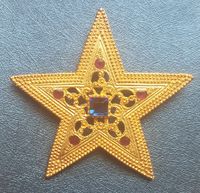 Regalia of a Dame or Knight Grand Star of the Order

Members of this rank were known as Knights or Dames Grand Cross until 22 June 2020. This chart reflects the name of the rank at the time awarded.