The Most Noble Order of Menelvagor, founded in 1980, is the second highest order of chivalry and the most prestigious honour in the Empire of Pavlov. It is awarded at the Sovereign's pleasure as his or her personal gift. Membership of the order is limited to the Sovereign, and no more than 7 Knights or Companions. The order also includes supernumerary knights and ladies (e.g. members of the Pavlovian Imperial Family and foreign monarchs). 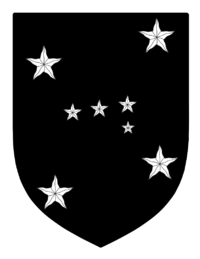 Arms of the Order

The order's emblem, depicted on insignia, is a garter with the motto MENELVAGOR in gold lettering. Members of the order wear such a garter on ceremonial occasions.

New appointments to the Order of Menelvagor are always announced on 10 February.

The Order of Menelvagor was founded as a private confraternity by Erik, Baron of Sarthe (later 17th Duke of Ozenne, then HIM Emperor Ivan VII Aleksandrovytch of the Empire of Pavlov) in 1980. It was established as an award to recognize those personal friends of the Emperor that had provided great personal service over many years. In 1985 it was absorbed into the Official Orders of the House of the Dragon as the senior Order of Chivalry. The Order was again absorbed into the Orders of the Kingdom of Dor-Amarth on April 1, 2014 as the premier Order of Chivalry of the Kingdom. When the King of Dor-Amarth became Emperor of Pavlov as Ivan VII Aleksandrovytch the Order of Menelvagor was absorbed into the Empire of Pavlov as a Dynastic Order.

At the time of its foundation, the Order consisted of Emperor Ivan VII, together with 1 Founder Knight, listed in ascending order of stall number in St. George's Chapel:

Membership in the Order is strictly limited and includes the Monarch and not more than 7 companion knights and various supernumerary members. The monarch alone can grant membership. He or she is known as the Sovereign of the Order.,

Male members of the Order are titled "Knights Companion," and female members are called "Ladies Companion." Appointments are made by the Sovereign acting alone, with no prior nominations.

In addition, the Order includes supernumerary members, who do not count towards the limit of 7 companions.

In 2000, supernumerary membership was extended to foreign monarchs, who are known as "Stranger Knights and Ladies of Menelvagor. Each such installation requires the enactment of a statute. In lesser orders of chivalry, such foreign members would be regarded as having received honorary knighthoods.

The Sovereign may "degrade" members who have committed very serious crimes, such as treason or fleeing the battlefield, or those who have taken up arms against the Sovereign.

In the Order's Statutes and Ordinances there is a formal ceremony of degradation, in which Dragon Herald, accompanied by three Companions, proceeded to the Order's Chapel. While the Dragon Herald reads out aloud the Instrument of Degradation, a Companion climbs up a ladder and removes the former knight's banner, crest, helm, and sword, throwing them down into the street.

The Order has two officers: the Dragon Herald and the Secretary & Register

Dragon Herald has specific duties as the Order's officer of arms, attending to the companions' crests and banners of arms, which are exhibited in the chapel.

The garter of the Order

For the Order's ceremonial occasions, such as the annual Feast Day, the members wear elaborate vestments and accoutrements (accessories), which include:

On other occasions when decorations are worn, the members wear simpler insignia:

On the death of a member, the Lesser George and breast star are returned personally to the Sovereign by the former member's nearest male relative, and the other insignia to the Central Chancery of the Orders of Knighthood, save the riband, mantle and hat.

Badge of the Secretary & Registrar

For ceremonial occasions of the Order, the officers wear the following garments and accessories:

Stall plates are small enameled and engraved brass plates located in the Order's Chapel as memorials to Knights of Menelvagor. They are inscribed with the knight's name, and generally with his titles, offices, and motto. In most cases his heraldic achievement is depicted.

Members are assigned positions in the Order of Precedence, coming before all others of knightly rank. The wives, sons, daughters and daughters-in-law of Knights Companion are also assigned precedence. Relatives of Ladies Companion are not, however, assigned any special positions. (Generally, individuals can derive precedence from their fathers or husbands, but not from their mothers or wives.)

The members may encircle their arms with the Garter, or if they wish, with a depiction of the collar. Stranger Knights and Ladies do not embellish the arms they use in their countries with Pavlovian decorations.