From MicroWiki, the micronational encyclopædia
This is an old revision of this page, as edited by Luxor (talk | contribs) at 18:14, 5 March 2022. It may differ significantly from the current revision.
(diff) ← Older revision | Latest revision (diff) | Newer revision → (diff)
Jump to navigation Jump to search

The Order of Carthage was an order of chivalry within the Empire of Agber and the highest order of the Grand Duchy of Carthage. The intention of the Order was to honor those who have provided a service to Carthage. It was created on 7 January 1998 as the first order of the newly established Grand Duchy, and was officially dissolved with the nation on 5 April 2021.

For much of its early history, the Order of Carthage was considered a "National Order," and was funded by the Empire, with Empress Arlene serving as the font of honor. Control of the order was given to Carthage in 2020.

There were three classes of the Order, each with their own unique regalia:

The Order of Carthage was established the same day as the Grand Duchy, with Empress Arlene serving as the font of honor, in her role as the Grand Duchess of Carthage. When she abdicated this role in favor of Grand Duke Andrew in mid 1998, he became the Sovereign of the order.

In late 2003, the Empress declared that the newly established Carthagean Order of the Rosy Cross be disbanded. In protest of this decision, Grand Duke Andrew broke off contact with all persons within the Empire of Agber. After months of unsuccessfully attempting to reach the absentee Grand Duke, Empress Arlene revoked all of his titles and awards. As part of this sequence of events, all remaining pieces of the original regalia for the Order of the White Lion were lost to Carthage. As these pieces were funded by the former Grand Duke, Empress Arlene found this unfortunate, but acceptable. However, she had helped fund the pieces of the Order of Carthage that remained in his custody, and decided to create a new category of "National Orders." These orders would be the highest honor in each nation of the Empire, with the Empire's Sovereign serving as the financier and font of honor for them. This is a policy that would continue until 2020, when control and responsibility for these orders was given over to their respective nations.

The order was officially dissolved on 5 April 2021, with the nation of Carthage.

The final Sovereign and font of honor for the order was Grand Duke Eric, as the reigning monarch of Carthage. While his rank of Knight Grand Cross officially was equal in precedence with others who hold that rank, his status as Member Ex-Officio gave him functional precedence within the order. 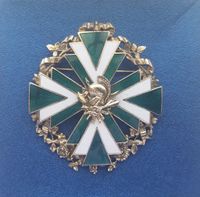