Milaw Vihoven, also known as Milaviho or simply Milawism is a religious movement in Munkkia founded by President Mathias L. Magnussen in 2014. Milaw Vihoven is based off the holy scripture the "Milaw" ("Message" in Traditional Qeelsh), a central text which tells the story of several "Martirs" ("Messengers"), including the most important one, Jiahen, who was contacted by Angel Vihobe, the first Martir to share the plan of the creator known as "Angrasta" ("The Greatest"). The Milaw consists of chapters known as "Dunnuy", which contain stories, songs and poem. The followers of Milaw are known as Jia ("Yours") .

The Konche was sent to the four disciples, and spread around the Gaersi village controlled by Ruwika. The Konche is a set of rules, both ethical and legal, that is to be implemented and followed by the Jia people. It also contains the the way to convert, and a brief description of Chepo. Konche starts out with 11 ethical rules that every Jia has to follow exclusively, with no exceptions to enter Chepo. The rules are called Repenetien. Breaking the rules are known as Weinea.

1. You Cannot believe in or worship any other faith than Milaw. If you do, you are not a Jia

2. Only if you or others are directly attacked, can you take lives. In No other situations are murder accepted or allowed. This is Called Mulife

3. You Are allowed to have Five Sexual partners in your life. If you have more you are not a Jia.

4. You Must Never lie about your Faith in Milaw, unless Your life depends on It.

5. You Cannot hurt others, neither on the Body, the Mind of the Wallet.

6. You must not take into your Body any substance that will Control you, Slow you or Damage your judgement.

7. You must not eat the Meat of Saiaa Animals

8. You must Not take Fire onto any Object or Symbol for Milaw, this is Zirinal

9. You Must not engage into a Sexual Relationship without consent

10. You Must respect every Human, in spite of Faith, Color or Sex. You are All Equal. Never Separate Yourselves

Saiaa is the term for an animal that is unfit for human consumption, because of their high intelligence, and their relationships with humans. These animals include pigs, dogs, cats, monkeys and apes, dolphins, rabbits, gerbils and all members of the reptile and amphibian family.

"I, Vihobe, With the Konche, Declare all Saaia unfit for human consumption, and therefore not allowed. Only if you are Directly forced to Eat Saaia are you forgiven. The Saaia has reached a Level of Complexion that Makes them Valuable of Living. " - Milaw. Chapter 9, p. 12.

Mulife is the term of Permissible murder. Permissible murder is described in the Milaw, including Chapter 3, where Jiahen takes the life of the man who was choking another man. Vihobe declared Jiahens murder as permissible, and expected by Vihobe.

"Jiahen, Fear not. I am Angel Vihobe. I visited Your Mother on the Night of your Virgin Birth. I have Chosen you Because you See Right from Wrong. You have Taken One life to Save One Other. You are The Martyr of the Universe, And I am Your Angel." - Milaw. Chapter 3, p. 14.

Mulife is generally considered killing in self defense, or in the defense of others.

Zirinal is the worship of the Milaw, and the respect you show to the symbols of Milaw. Repention 9. calls arson and damage to the Milaw, or symbols depicting anything related to the Milaw to be Weinea. 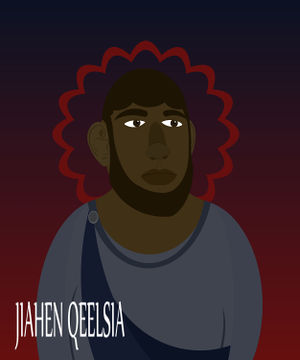 "Men are not to remove their body hairs, only shorten them. Women are not to do the same. Clothing should never cover the face. Feet must be covered at all times when in public settings, as they can induce sexual stimulation. Breasts of both males and females, and genitals are also not to be shown in a public setting. Milaw symbos are encouraged, but not obligatory. Wear your faith with pride"

There are four pillars a Jia has to perform in his lifetime to go to Chepo. These four pillars are described in Chapter 8 of the Milaw. Each pillar is named after the disciples.

Anza - Read and understand the entire Milaw and the Konche. Named after Anza as he was an avid writer and reader, and used to give out advice to the Gaersi Jia people because of his complex understanding of the Konche.

Veliam - Give thanks to Vihobe every day in a daily prayer message. This prayer is called Befia, and is mandatory. Named after Veliam for his many prayer messages and thankfulness to Angel Vihobe.

Tonih - Give money or property to those who have few or none. No specific amount, but as much as you can live without. Named after Tonih for his generous donations to the poor Gaersi people.

Sebas - Spread the word of Milaw to those who are not aware. Named after Sebas for his many preachings to the Gaersi people about Martir Jiahen.

Prophetic dreams in the milaw

Chapter 5, p. 30-32 states that the Milaw, and Jia people are connected throughout the universe, and that the message of the Milaw will be brought to the chosen people of planets who have reached high enough intelligence to understand and follow its message.

"I, Vihobe, Call upon you, Jiahen. You and Your Deciples will lead The People of Gaersi and Eventually Monkkei, but as for The remaining Worlds beyond Your Own, The Chosen Ones will be sent The Message of the Milaw in their dreams. The Dreams will be known As The Prophetic Dreams, and Will Be sent To Their respective People when Their Time has Come. I chose You, Jiahen, To Bring forward The Message and To set an Example for Worlds beyond Your Own. The Receivers of the Dreams will be Known as the Veltir" - Milaw. Chapter 5, p. 30.

Although Mathias was told in his dreams to not reveal the exact time he was chosen to become Veltir, it happened somewhere in the late part of 2014.

Mathias became the Veltir in the latest part of 2014. He was ordered in his dreams to write down the message of the Milaw and spread the message. The Milaw states The Dreams will be known As The Prophetic Dreams, and Will Be sent To Their respective People when Their Time has Come, However, why the time of Earth was the specific time that it was, Mathias does not know. Mathias does not consider himself a spiritual leader of any sort.