From MicroWiki, the micronational encyclopædia
This is an old revision of this page, as edited by MattL (talk | contribs) at 17:07, 3 September 2021. It may differ significantly from the current revision.
(diff) ← Older revision | Latest revision (diff) | Newer revision → (diff)
Jump to navigation Jump to search

Elava, formally known as the The Kingdom of Elava, is a self-declared independent nation-state, referred to as a micronation. It is located in the south of Sweden in the county of Skåne. It was founded on the 20th of October 2020 with the signing of its Ex Codice Elava (its founding document).

Elava's name takes inspiration from the Elysian Fields, also known as Elysium. Elysium is a kind of heaven for the heroic and virtuous in Greek mythology.

The nation's currency, the Elavan Crown, takes its name from the currencies of the nordic countries, which are also names Crowns. They chose this name to pay tribute to the heritage of the country, being located in Sweden.

On May 20 2021, the then Consul and Animo Elava, Harrison I, declared the country a monarchy with the '2021 Royal Decree of Conversion to Monarchy' act. The act saw all diplomatic relations, all dukedoms and the democratic constitution nulled. This was the start of the monarchic restoration era, named so since it's the when Elava worked to regain their foreign relations and internal functions as before the conversion to monarchy.

One considerable change that has occured in the current monarchic era is that the nation's policy on micronational militaries changed. During the republic era, a military was deemed a waste of time and resources. This changed during early July 2021 as a 'royal Elavan armed forces' was established and the Royal Elavan Cyberforce was incorporated into the new military.

In late July, the king decided to stop working on a constitution, instead deciding on ruling by absolute power. The reason for the abandonment of the constitution was simply because it was deemed to be too much work for something that would only make it harder and more complicated to execute the micronational vision of the king. The constitution might be picked up again when Elava is considerably much more established and the King does not want as much of an involved ruling style.

Elava is currently rebuilding their formal foreign relations as all diplomatic treaties between other nations were nulled in their conversion to monarchy. 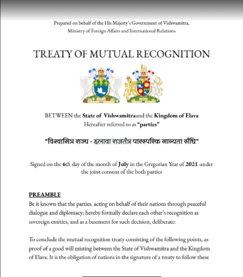 Mutual recognition treaty between the state of Vishwamitra and the Kingdom of Elava.

Elava is a member in the Sough Convention on Climate Change (SCCC, 2020), and is one of the initial signatory nations. They have also gained entry into the Cupertino Alliance as an observer state.

The Kingdom of Elava's military is the 'Royal Elavan Armed Forces'. It is made up of three branches, the 'royal army', the 'royal Navy' and the 'royal airforce'. It also has another military branch that is called the 'royal Elavan cyberforce'. or commonly called the 'REC'. The REC was founded to protect Elava in the digital age that micronations exist in. But it has more purposes than that, the REC works not only for Elava but tries to protect micronationalism as a whole.

There is currently only one military regiment in Elava. It is the '1st armed guns', it is commanded by lieutenant Moataz.

The kingdom has a virtual navy, the Royal Elavan Virtual Navy. Which functions in the game of Stormworks: Build and rescue, in the name of the kingdom. The virtual navy is completely dispatched from any other military organisation in Elava and is only for fun.

The Elavan mainland is located in Malmö, Skåne, Sweden. Being close to the coast it is windy and somewhat cold, although it can still get very warm in summer.

Elava has smaller territorial claims all around the world with varying climate.

As of now, Elava does not have any industry. But it does have a bank and currency, the Elavian crown. There is a state run central bank that handles all eventual monetary transactions within Elava. The minister of finance also work to handle the central bank and help encourage any eventual trade.