From MicroWiki, the micronational encyclopædia
This is an old revision of this page, as edited by Johann (talk | contribs) at 01:46, 11 August 2020. It may differ significantly from the current revision.
(diff) ← Older revision | Latest revision (diff) | Newer revision → (diff)
Jump to navigation Jump to search 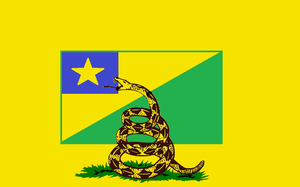 Singulary State Kazzardism is a mixture of the advantageous[citation needed] views of six original political philosophies, which include Limited Democracy, Benevolent Dictatorship, Anarchy, Socialism, Eco-feudalism and Communism. And uses a Echelon Parliament system as a legislature.

A Kazzardist Singulary State uses the systematic views of this formula of democracy. This type of democracy practically means that more important people get a larger and more considered vote than others.

A country which is run upon Singulary State Kazzardism would be runing on a more serene form of benevolent dictatorship, this is mostly to maintain order of power. This mainly means that the executive is a 'for-live' job (unless something happens, e.g. quiting). Non the less the executive of the state shouldn't be encouraged to be head of state.

In the Kazzardism spectrum of this type of government it also has anarchic views on how to organise the government. The ideologies that are used are:

The main reason of socialism in a kazzardist singulary state is to balance politics from the social environments. The ideologies which are constructed into this kazzardist form are below:

These governmental views of eco-feudalism are also included:

There are only two ideologies that are included in the Singulary State Kazzardism, and they are; governmental ownership 'of land and productive farms.'