From MicroWiki, the micronational encyclopædia
This is an old revision of this page, as edited by Johann (talk | contribs) at 06:51, 2 September 2020. It may differ significantly from the current revision.
(diff) ← Older revision | Latest revision (diff) | Newer revision → (diff)
Jump to navigation Jump to search

The Kaznian Empire (also infrequently known as the First Kaznian Empire) existed for a large part of 2006 and was considered the true successor of the Confederate Empire of Versillies. The Kaznian Empire was created gradually over a period of time, that saw communism in Kaznian collapse. After the communist state of Kaznia (the Confederate Empire of Versillies, CEV), the nation became more prosperous, particular legislation was dismissed and this allowed for the nation to establish more businesses and establish trade with the neighbouring nations of Zagoria and Chivaliers. On two occassions, Kaznia was renamed "Alkrain", once renamed "Russvia" and once renamed "Russiva".

The Kaznian Empire was created after the Confederate Empire of Versillies due to the previous government becoming corrupt and much too harsh. The Empire began with much less territory than what it had at the end of its existence, and was almost completely surrounded by Chivaliers. After an agreement between both nations, Chivaliers ceded more than three quarters of its land back to England. Not long after, the Imperial Kaznian government annexed huge amounts of land, and began to emerge as a highly influential nation, within the small, isolated community of the Old known micronations. The community soon declared Kaznia a superpower and no other nation in the community could rival its powers, with the acception of The Clan, which had a ruthless army. Soon, after exploiting its title as superpower and "bullying" other nations to do its bidding, conflicts began to emerge between Chivaliers and Kaznia. Many wars between them, similar to the Cold War, began to occur. These bad relations continued to exist until the end of Chivaliers occurred in December 2006. 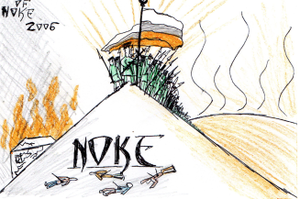 A paper from the Starizhodis, depicting a victory at one of the battle at Noke

Soon, a series of Wars between Noke and Kaznia also occured with many of the battles ending indecisively. These conflicts contributed to pro-Kaznian paintings, which increased patriotism inside Kaznia, this caused many Holy Wars to be initiated against Chivaliers and particularly Noke (which believed in a bazaar form of Paganism focused on fire). Although only one major Holy War waged on Chivaliers occurred (the "Nyekrem War") most were against The Clan, with Chivaliers and Zagoria supporting Kaznia. Many of these Holy Wars (attempting to convert the Nokeish populations) were successful in gaining land, it failed to influence their beliefs. As a result a final plan was drawn by Kaznia which would have been a large full scale invasion, the idea would utilize untested prototype weaponry, this war, however, was never initiated as the Empire had been reformed into the Kaznian Federation.

The Kaznian Empire was seen as the most technologically advanced nation in the community, having spent a large amount of its national budget on military. The only competitor in technology was The Clan, however both Kaznia and The Clan worked together to create technology and had signed treaties to defend each other against attack from Chivaliers, which was seen as a high possibility due to Zagorian spies sharing (possibly incorrect, deliberate or not) information.

The Imperial Kaznian government was heavily influenced by Imperial Russian culture. Almost all aspects of Kaznia at the time were based upon the Russian Empire. The economy, however, was based upon the ruthless corporations that appear in the series of "Oddworld". This time period is considered the strongest form of Kaznia ever, it had large influences on its neighbouring micronations and was also fiercely patriotic, because of this, many aesthetics were created, such as the drawing "The Gates of Rusviya", which depicts Kaznia being surrounded by impenetrable walls. The nation also created many religious objects, including a staff used by the Tsar shaped like an Orthodox cross. A religious language was created used on ceremonial occasions, the language looks very similar to Old Church Slavonic.

The vast Empire of Kaznia was divided firstly iunto Sectors, then into Areas and finaly into Regions, in certain circumstances areas where known as "Oblasts", "Divisions" or "Districts" instead of Regions.

During the Second Kaznian Empire, two more Sectors were added: Nolybab and Litov.

Many cultural aspects of Imperial Kaznia are still visible in todays Cheslovian society, such as the "Imperial Gothic" text used to write cultural information during the Kaznian Empire and also the Cheslovian double headed eagle. Despite this, Cheslovia also looks back at Imperial Kaznia as a reminder of its old mistakes, mainly in diplomacy, because of this, todays Cheslovian society is not fiercly patriotic to the piont of hatred of other micronations.