From MicroWiki, the free micronational encyclopædia
This is an old revision of this page, as edited by Oritsu.me (talk | contribs) at 18:29, 2 June 2022. It may differ significantly from the current revision.
(diff) ← Older revision | Latest revision (diff) | Newer revision → (diff)
Jump to navigation Jump to search

The Desert Palm is a medal awarded by the Republic of Molossia. It is commonly awarded to leaders of other micronations.[1]

The desert can be a barren place, but as the desert palm brings life to the wasteland, this medal signifies the bearer as having brought life to their own nation - and further demonstrates amity between our nations, as one would find among comrades at an oasis. 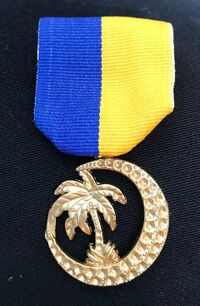