Barry I of South Bank

From MicroWiki, the free micronational encyclopædia
This is an old revision of this page, as edited by Austenasia (talk | contribs) at 19:06, 30 December 2014. It may differ significantly from the current revision.
(diff) ← Older revision | Latest revision (diff) | Newer revision → (diff)
Jump to navigation Jump to search

King Barry I, also known as Olcut III in regards to the Chiefdom of the Moon, was the last Chieften of the Moon during the Predynastic period of Wilcsland, and an usurper king in opposition to King Declan I in the early history of the Kingdom of South Bank. 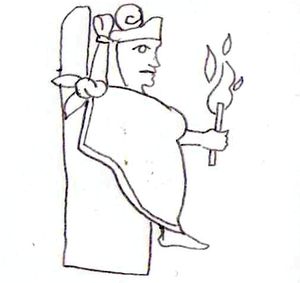 Artistic depiction of Barry I as Olcut III

Known as Olcut III, he succeeded Olcut II as Chieften of the Moon sometime during 1999. Later that year, the Chiefdom of the Moon was conquered by the Chiefdom of the Sun under Nectombetec II, and Olcut III was deposed. Nectombetec II was declared successor of the previous Great Chieften, and on 1 May 2002 was crowned King of South Bank as King Declan I, unifying all of the chiefdoms into a kingdom.